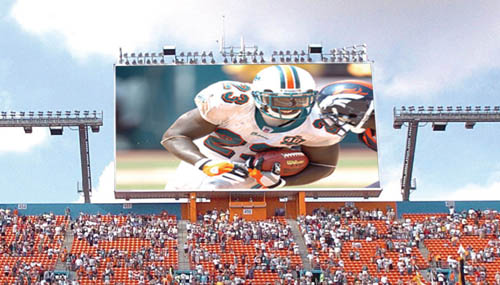 Daktronics has been chosen by Dolphins Stadium to provide two large ProStar video displays, each with true, physical pixel resolution exceeding the 720p high definition television standard of 720 pixel by 1,280 pixel resolution. The largest of the two displays will be the largest of its kind in the world. The project is scheduled to be completed in time for the 2006 baseball season.

The facility will be the first NFL venue to implement true HD large screen video. Sports fans are becoming accustomed to watching their teams on high definition broadcasts. Now fans in Dolphins Stadium will see incredible, high resolution, crystal clear, live video and replays on the new digital displays behind each end zone. Both ProStar screens will incorporate an even wider aspect ratio than the 9:16 wide screen ratio of HD television, and will give fans a wider, more panoramic view of the action. With their superb resolution and super wide format, the displays will also have the ability to show multiple images simultaneously.

Behind the east end zone, a Daktronics ProStar display will be installed on the existing scoreboard structure. This display will measure approximately 50 feet high by 137 feet with a true resolution of 736 pixels high by 2,112 pixels wide. Full-screen images shown on this display will be comprised of more than 1.5 million pixels, made from more than 4.6 million red, green and blue LEDs. Upon completion, this display will become the world’s largest high definition video display, surpassing one installed earlier this year that was recognized as the largest by Guinness World Records. The largest of the two ProStar displays at Dolphins Stadium will be nearly 20 percent larger than the current record holder.

Behind the west end zone, a second large ProStar display will be installed. This high definition display will measure approximately 50 feet high by 99 feet wide, and will be mounted to the existing support structure.

“Daktronics is very excited about the opportunity to bring true HD large screen video to a great venue like Dolphins Stadium,” said James Morgan, President and CEO of Daktronics. “This will add another dimension and greater entertainment for the fans. With this upgrade, Dolphins Stadium will claim the world’s largest HD video screen, which will be a landmark for video display technology.”

“As a football fan who has attended Dolphins games, I can say the game-day experience is already exceptional,” said Brent Stevens, Daktronics Regional Sales Manager for Large Sports Venues. “The installation of these two revolutionary displays will enhance that experience even further by allowing Dolphins fans to see images unsurpassed in any venue in the world.”

“From home televisions to the way TV networks broadcast football games, the sports and entertainment industries are moving to high definition video equipment, and now is a great time for Dolphins Stadium to implement this significant transition,” Stevens said. “Fans will be amazed with the image quality of the ProStar screens.”

About Daktronics
Daktronics large screen video systems entertain and inform fans at sports facilities around the world. Daktronics ProStar technology is currently used at 14 National Football League facilities. With this project, Daktronics systems will have been, or will be used at, four consecutive Super Bowls, including the 2005 Super Bowl at ALLTEL Stadium in Jacksonville, Fla., the 2006 game at Ford Field, home of the Detroit Lions, in 2007 at Dolphins Stadium in Miami, and the 2008 Super Bowl at the Arizona Cardinals new stadium currently under construction.

Daktronics began manufacturing large screen, full-color, LED video displays in 1997. Since then, over 1,600 ProStar and ProAd full-color displays have been sold and installed in sporting, entertainment and commercial facilities around the world. Since 2001, Stanford Resources, Inc. has ranked Daktronics as the world’s leading provider of large screen LED video displays.

Daktronics has strong leadership positions in, and is one of the world’s largest suppliers of, electronic scoreboards, computer-programmable displays, and large screen video displays and control systems. The company excels in the control of large display systems, including those that require integration of multiple complex displays showing real-time information, graphics, animation and video. Daktronics designs, manufactures, markets and services display systems for customers around the world, in sport, business and transportation applications. For more information, visit the company’s World Wide Web site at: http://www.daktronics.com, e-mail the company at sales@daktronics.com, call (605) 697-4300 or toll-free (800) 325-8766 in the United States or write to the company at 331 32nd Ave. PO Box 5128 Brookings, S.D. 57006-5128.