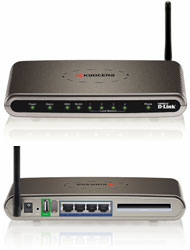 Free Firmware Update Increases Usability and Performance of “Mobile Hot-Spots” with Faster Uploads and Downloads on a Variety of Devices, Including The Kyocera KPC680 ExpressCard

EV-DO Rev. A is an upgraded network technology recently launched with several CDMA wireless service providers that offers uplink and downlink speeds rivaling broadband landline connections. The Kyocera KR1 Mobile Router takes a single CDMA2000 1xEV-DO Rel. 0 or Rev. A connection and creates a mobile Wi-Fi hot spot using 802.11b&g technologies, allowing connectivity for multiple PCs. By supporting the new Rev. A networks and devices, Kyocera’s award-winning router delivers download speeds reaching over one megabit per second (1 Mbps) and upload speeds up to 800 kilobytes per second (800 kbps)(a). The KR1 Mobile Router is a universal accessory that is compatible with most EV-DO PCMCIA cards, ExpressCards as well as USB-enabled devices and EV-DO handsets.

“Clearly now that EV-DO Rev. A network deployments are more widespread, there is going to be increased demand to use that performance boost with a variety of devices, such as Kyocera’s KPC680 ExpressCard,” said Lee Ittner, executive vice president, global sales and marketing at Kyocera Wireless Corp. “This simple firmware update for the KR1 Mobile Router offers professionals and home users alike the ability to create and share the broadband wide area connection that Rev. A enables.”

The easy-to-use Kyocera KR1 Mobile Router can be installed in minutes virtually anywhere and provides high-speed Internet and data access for multiple users. An advanced firewall and additional security controls such as 128-bit WEP encryption enhance protection against viruses, hacking and identity theft. A cost-effective alternative to traditional networks, the KR1 Mobile Router is especially useful for mobile work groups such as dispatch teams, consultants, road-warrior sales groups, satellite offices, command posts, and more. It can also be used as a reliable alternative for fixed-broadband services in households.

Measuring 8.5 in x 5.3 in x 1.3 in and weighing less than a pound, the KR1 Mobile Router supports both CDMA2000 1xEV-DO Rev. A and Rel. 0 carrier networks and includes an intuitive configuration wizard and Web-based device management.

(a) Actual speeds may vary depending on carrier.

(b) Price may include rebates or special offers.