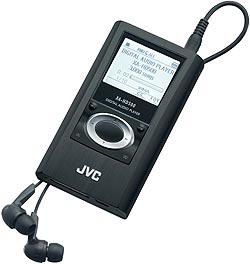 The JVC Alneo XA-HD500 plays MP3 and WMA files, supports Windows Media PlayerA 10 and features a USB 2.0 connection for fast file transfers. Other features include a backlit LCD, the option of recharging through the supplied docking station/AC adapter or the USB port when connected to a computer, four digital surround listening modes and Active Hyper Bass for enhanced bass performance.

Another highlight is the player’s use of JVC’s K2 Technology, audio enhancement technology developed by JVC hardware and music recording engineers and featured in JVC home audio components as well as in JVC recording studios. Specifically, the XA-HD500 uses JVC’s CC Converter, an adaptation of JVC’s K2 Technology that improves the sound quality of compressed music by reclaiming information lost when music is compressed to create WMA, MP3 and other compressed music files.

The JVC XA-HD500 comes with a docking station that not only charges the player’s battery, but also features audio outputs for easily connecting the player to a PC or audio component for playback. There is also an included infrared remote control for operating the player. What’s more, using the remote automatically enlarges the display’s type-size for easier reading when used for home playback in the docking station. USB and audio cables are included.

Another key feature is the XA-HD500’s 30 hours (with backlight and surround mode settings off) of continuous play, thanks to JVC’s power-saving technology.

JVC’s Alneo XA-HD500 comes with Windows Media Player 10 software, and supports auto synchronizing of songs and playlists when connected to a computer. In addition, on computers with WMP 10 installed, the XA-HD500 can be used as an external storage device that supports drag and drop transfer of music and data files for simple storing and copying.