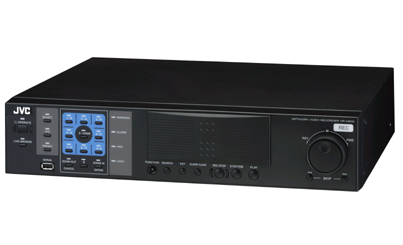 JVC Professional Products expands its V.Networks lineup with the introduction of the VR-N900U, a fully integrated standalone network video recorder (NVR), which records images from both analog and IP cameras enabling the cost-effective upgrade of an existing system to a digital IP network.

Traditionally, users have had to choose between standalone analog video recorders, or computer based network recorders that required installation, configuration and licensing of external software packages. The VR-N900U ships with pre-installed, fully licensed Milestone software and is configured to accept both analog and IP camera inputs. Its single box design provides simple configuration and management of all sized surveillance systems using conventional front panel controls, or with an optional keypad and mouse.

For large-scale, IP-based security systems, multiple VR-N900Us can be connected via network servers. In addition, the NVR operates as a stand-alone unit without the need for a PC and fits easily within an existing network infrastructure.

The VR-N900U’s automatic IP camera discovery mode with Milestone Xprotect pre-installed software assures easy installation and operation. Each VR-N900U can manage and record up to nine cameras simultaneously from an unlimited number of cameras on the network and has the ability to record from any of the four analog outputs.

Additionally, the Remote Client feature of the Milestone Xprotect software provides access for up to 10 users to view the images from the VR-N900U and the triplex feature enables users to view, record and playback images in real-time. The recorder’s VCR/DVD-like design provides familiar front panel controls including jog/shuttle and RGB monitor output.

The VR-N900U records high quality motion JPEG or MPEG-4 images up to 120 fps at VGA 640 x 840 resolution. Images are stored on the built-in 250GB hard disk drive. Users also have the ability to install an additional internal 250GB HDD.