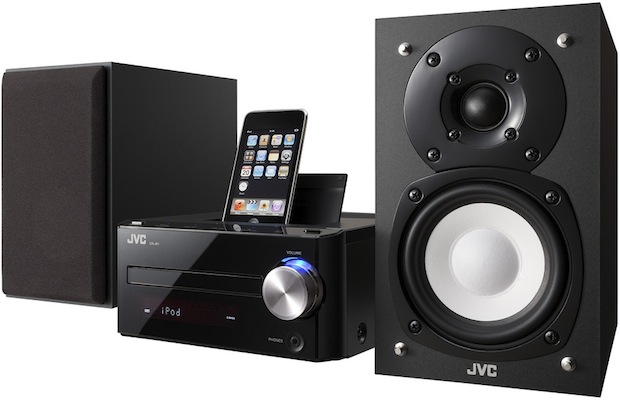 JVC has expanded its Procision series of premium-level products with the introduction of a new high-performance micro audio system. The new JVC UX-J51 is a three-piece system that combines class-leading performance with clean, elegant design.

The new JVC UX-J51 is a CD micro component system with a built-in dock for iPod, USB (2.0) input and an FM/AM tuner. It's comprised of a single main unit and a pair of two-way, bass reflex speakers. Most functions are controlled using flush, top-mounted touch keys illuminated in blue, with the exception of volume, which is handled by a large, silver knob on the main unit's front panel. A full function remote control is also included.

A key performance feature is the system's separate left and right channel amplifiers, each rated at 40 watts. The two-way speakers feature a one-inch (2.5cm) soft-dome tweeter and a 4.3-inch (11cm) cone woofer. The audio performance is optimized using CONEQTM technology that matches amplifier and speaker performance to ensure equalized power levels across all frequencies, resulting in a clean, natural sound throughout the listening room.

For system expansion, the UX-J51 includes a digital optical input and output, analog input and output, aux input, and a subwoofer preout. There's also a headphone jack, FM and AM antenna jacks and banana speaker jacks. The system also features a clock/timer.