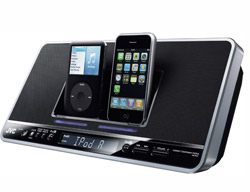 The number of multi-iPod households continues to soar, so to address the home playback and charging needs of these proliferating iPods JVC now offers a dual iPod docking station.

The new JVC NX-PN7, now available, accommodates two iPod players side-by side, charging them simultaneously and offering playback from each through the dock’s speaker system. Supplementing iPod playback is an AM/FM tuner, and adding to the unit’s versatility is a clock and timer. In addition, there’s an analog audio input for connecting other devices for playback. What’s more, a video output makes it a snap to play downloaded video content back on virtually any television.

Though the NX-PN7 handles two iPod players, it measures a mere 13 inches wide. It features sleek and sophisticated styling, with a black cabinet and speaker grille, and controls arrayed clearly and logically in a band along the bottom. Adding a bit of flair are two illuminated strips, one under each docked iPod. These can display one of nine colors – including white, blue, red and others. The included remote features dedicated iPod control keys that simulate the iPod control wheel layout and users are able to easily shuffle, repeat, scroll and select songs from the iPod menu.