New for 2013 is a one-button remote and microphone compatible with iPhone, Blackberry and Android devices. Three models – HA-MR77X / HA-MR55X / HA-SR44X – include this feature, as well as a Smart Switch that allows for compatibility with most other smart phones. The microphone is housed in the inline single-button remote that allows users to play, stop and skip tracks, as well as answer phone calls. Two of the five new models are available without the remote and mic – the HA-M55X and HA-S44X.

Full range sound quality is assured through the use of extra-large neodymium driver unit – 1.57” (40mm) for the on-ear HA-S44X / HA-SR44X; 1.97” (50mm) for the over-ear HA-M55X/HA-MR55X; and 2.24” (57mm) for the DJ-style over-ear HA-MR77X. The combination of the large driver units and the Extreme Deep Bass Ports is what gives the headphones their ability to reproduce deep bass. 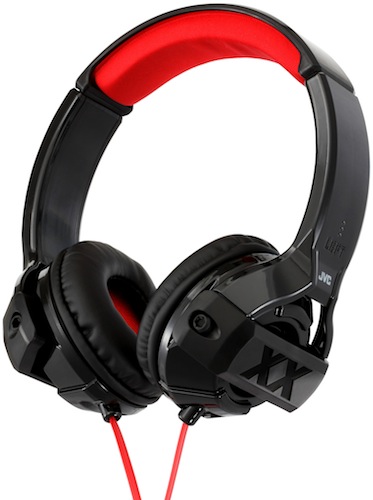 All XX Series headphones have been designed for comfort and excellent sound isolation – keeping outside sounds at bay while also preventing audio from leaking and disturbing those nearby. The padded headbands and soft ear pads allow the headphones to be worn comfortably even for extended listening sessions. For DJs, the HA-MR77X features a flip-up design that allows for easy hands-free monitoring in one ear. When not in use, the headphones can be folded away for ease of portability.

The cables and plugs are robust and built to last. The HA-MR77X features a DJ-friendly single-sided 3.6mm-thick, 3.94 ft. (1.2m) pure copper cable, while the HA-MR55X/HA-M55X/HA-SR44X/HA-S44X sport a sturdy 3.94 ft. (1.2m) Y-type cable of Oxygen-Free Copper (OFC) for maximum audio fidelity from source to ear. All models have gold-plated 3.5mm stereo straight plugs.

JVC’s tough rubber protectors continue in this latest series of XX by JVC, and the distinctive look gets a high gloss makeover for 2013, with some added styling to meet the demand of today’s fashion minded music fans.

Price and Availability
All the new XX models are available now at the following prices: