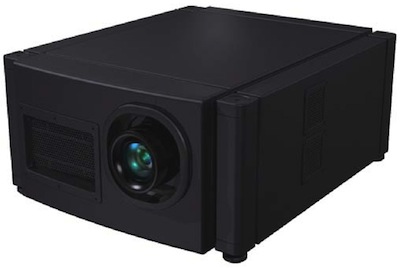 JVC Visual Systems Division introduces its new DLA-RS4000 Reference Series 4K home cinema projector at CEDIA Expo, September. 10-13 at the Georgia World Conference Center in Atlanta. The system is being showcased in the JVC D-ILA Theater in the Omni Hotel North Tower throughout the duration of the CEDIA Expo. Based on the same projection engine used in advanced simulation systems, it provides the superior imagery as well as installation flexibility required by uncompromising home theater consumers. This system is ISF and THX* certified.

Three newly developed ultra high definition 4K2K D-ILA devices allow the DLA-RS4000 to deliver a 10 megapixel image with a native resolution of 4,096 x 2,400–more than four times the resolution of HD. Up to four screens with full HD or WUXGA resolution images can be displayed simultaneously.

A new optical design provides 3500 ANSI lumens from a Xenon lamp and delivers excellent color rendering. Lamp power can be adjusted in eight steps for the ideal brightness for a variety of home theater settings and screen sizes. In addition, new Wire Grid polarizers in the optical engine that minimize light leakage are combined with new liquid crystal technology and a novel liquid crystal orientation to significantly reduce off-state light, resulting in a 10,000:1 native contrast ratio.

The RSVP4 custom digital video processing unit serves as a signal switching, scaling and processing hub for virtually any video source, including Blu-ray and gaming systems, cable and satellite receivers, and DVD players. The RSVP4 has a special feature enabling certified calibration specialists to calibrate either of two custom gamut memories based on the installation’s specific requirements. This enables each system to achieve an accurate color space for the source material being shown. Other features include audio delay compensation, and three separate gamma tables for customization of various image sources and viewing environments. The DLA-RS4000 is shipped complete with a JVC high quality projection zoom lens to maximize performance in almost any home theater setting.

Despite its advanced performance, the 110-pound DLA-RS4000 achieves a 65 percent reduction in size compared to conventional projectors in the same class. Generous horizontal and vertical lens shift capabilities permit flexible projector positioning, and its stackable design allows for applications such as 3D. Ethernet and RS-232C interfaces allow projector installation and adjustment from a PC-based Web browser for multiple units, plus an e-mail function can send out status messages and lamp replacement reminders.

“The DLA-RS4000 4K projector is the ultimate projector for discerning home theater enthusiasts,” said Jack Faiman, vice president, Visual Systems Division, JVC U.S.A.. “Not only does it produce amazing images for movies, sports, and video games, but its smaller footprint and incredible flexibility make it the ideal premium home theater projector for custom installations. Plus, despite all its high-end features, its user-friendly interface makes it easy to sit back and enjoy the view.”