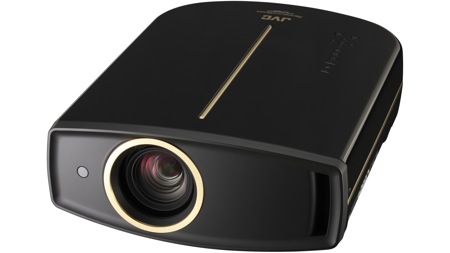 JVC Professional Products Company today demonstated its 1080p home theater line including the new DLA-RS20, a THX Certified* projector that offers a native contrast ratio of 50,000:1, the industry’s highest. Also shown was its award winning DLA-RS2 configured with an anamorphic lens for 2.35:1 motion picture viewing and the new, affordable DLA-RS10 with a 32,000:1 contrast ratio. JVC’s highly-acclaimed D-ILA projectors achieve high contrast ratios without the use of an auto iris. All are part of JVC’s highly acclaimed Reference Series line of high end home theater products.

Contributing to the DLA-RS20’s superior native contrast ratio is a newly developed lens with a 16-step fixed aperture that helps eliminate extraneous light that can reduce contrast levels and allows adjustment of brightness to suit user preferences. The DLA-RS10 features a 3-step aperture. In addition, changing the structural design of the optical section from a conventional L-shape with a mirror to a straight configuration reduced light leakage. Combining this new structure with a highly efficient lamp allows the DLA-RS20 to achieve a brightness of 900 lumens and the DLA-RS10 to achieve 1,000 lumens.

The DLA-RS20 is THX Certified to ensure accurate and exceptional picture quality in the home theater environment. A trusted cinema and consumer brand, THX certification provides JVC a means to further differentiate its projectors from competitive offerings and communicate a clear message about quality to customers.

Core technologies and many of the features that earned earlier JVC projectors accolades from reviewers and users alike are also incorporated into the new DLA-RS20. But improvements in several key areas allow all four new models to deliver brighter, more intense images. What’s more, JVC has engineered an all-new chassis that is smaller giving the projector a sleeker appearance.

Critical proprietary technologies at the heart of both projectors include JVC’s 0.7-inch full high definition D-ILA devices and the company’s wire-grid optical engine. These deliver the industry’s highest native contrast ratio, meaning that there is no dynamic iris to artificially inflate contrast specifications. As a result, the projectors simultaneously deliver true blacks and extraordinary luminance detail with unparalled contrast ratio.

JVC-developed D-ILA technology employs three (RGB) devices for a naturally rich, flicker-free picture even when there is rapid movement in the image. In addition, the optical engine with wire grid polarizers ensures precise light polarization without light leakage for true black level reproduction. Together, the D-ILA devices and the engine guarantee a smooth picture with vivid colors and high contrast.

Among key new developments found in the new projectors is the use of the HQV Reon-VX video processor developed by Silicon Optix to ensure excellent image reproduction with precision I/P conversion and scaling. In addition, the DLA-RS20 features color management that allows control of colors individually by R, G, B, C, Y, or M, in three separate axes of color phase, chroma saturation and brightness. Up to three customized color settings can be stored for future use.

Also unique to the DLA-RS20 is THX Certification. With a strict focus on image quality and signal processing performance, THX certification promises that the projector is capable of presenting a wide range of video content at maximum resolutions with the correct color and luminance levels. In addition, THX has created a battery of signal processing tests that challenge the projector’s scaling, motion conversion and de-interlacing capabilities. This type of in-depth analysis predicts how the RS20 will present a variety of high definition and standard definition content.

The DLA-RS20 also features the THX Movie Mode, a pre-calibrated video setting for watching movies on DVD, Blu-ray HD or broadcast television. This playback feature is designed to recreate the cinema experience at home by setting the display’s gamma, luminance, color temperature and other settings to mirror those used by filmmakers in post-production. THX Movie Mode also ensures projector brightness is optimal for large screen viewing.

Other features common to the DLA-RS20 and DLA-RS10 include:

Both projectors also include an external 12-volt trigger that can be used to automatically raise and lower a screen or draw curtains. Also, an automatic lens cover opens and closes with power on/off.

The DLA-RS10 is scheduled to ship this month with a suggested list price of $4,995. The DLA-RS20 will be available in December at $7,495. Both models are part of JVC’s Reference Series high end projector line.

ABOUT JVC PROFESSIONAL PRODUCTS COMPANY
JVC Professional Products Company, located in Wayne, New Jersey, is a leading manufacturer of home theater products and security products in addition to a complete line of broadcast and professional video systems. For more information about this, or any other JVC Professional Products product, contact Candace Vadnais at PFS Marketwyse 973-812-8883, ext. 430 or visit JVC’s Web site at http://pro.jvc.com