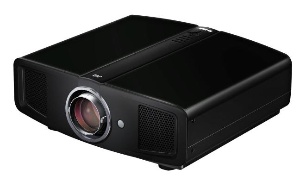 As part of JVC’s new Reference Series, a premium display product line, the DLA-RS1 video projector provides home theater enthusiasts with an extraordinary viewing experience at a fraction of the cost of–and with better performance than–high end digital cinemas. While the DLA-RS1 is targeted for the finest home theater installations, it is being introduced at a price that makes it accessible to a much wider range of home cinema buffs.

At the core of the DLA-RS1 is advanced video processing co-developed by JVC and Gennum Corporation, which ensures the faithful reproduction of high-quality images thanks to high-precision scaling function and Gennum’s VXP™ technologies.

Additionally, each of the three D-ILA chips has a native resolution of 1920 x 1080 allowing the projector to fully display a full HD 1080p signal without scaling. JVC’s new optical design provides a native contrast ratio of more than 15,000 to 1, a first in home cinema projectors.

The DLA-RS1’s full 1080p enable audio/video professionals and home theater enthusiasts to sit closer to the screen and open the angle of view, which provides optimum visual experience. Additionally, this projector can be used in a variety of room environments due to its adjustable 80% vertical and 34% horizontal shift lens. The 2x manual zoom lens has a range of 1.4 – 2.8:1, making it suitable for screens 60″ to 200″ inches wide in a typical home theater. The projector is finished in a sleek black cabinet with a non-reflective front panel to eliminate light reflections onto the projection screen.

The DLA-RS1 is equipped with dual HDMI input (PC and HDTV HDCP) accepts full HD 1080p signals provided by Blu-ray. Component, composite, and S-Video inputs are also provided. Via its RS-232 port, the unit can be externally operated by popular home theater automation controllers. Additionally, the projector features a convenient video adjustment menu that allows users to adjust the picture according to the source video as well as their own preferences.

The suggested list price for the DLA-RS1 is $6,295 and will be available Q1 2007. For more information and photos on JVC’s D-ILA projectors and technology, please visit JVC’s Web site at http://referenceseries.com