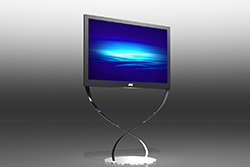 Victor Company of Japan, Limited (JVC) is pleased to announce that it has developed next-generation super-thin LCD technology for 32-inch television displays. The significant reduction in thickness and weight allow greater flexibility in the design and layout of commercial and household visual environments.

Development Background
Consumer electronics makers wrestle with the challenge of developing thinner LCD displays in parallel with other advances, such as improving display resolution and reducing image lag. Thinner LCDs provide users with greater flexibility in the design and layout of commercial and household visual environments by overcoming restrictions imposed by the thickness and weight of existing products. 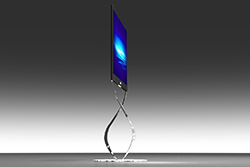 JVC achieved this goal by developing next-generation super-thin LCD technology that reduces thickness to .28 inch (7mm) and weight to 11lbs (5kg). This makes it possible to enhance visual environments in places where heavy displays are difficult to install, such as public spaces, amusement facilities, outlets, companies, schools and houses.