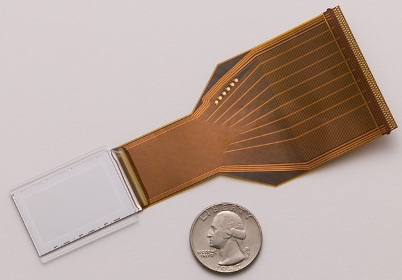 Rising above its competitors in a very aggressive market, JVC is previewing the world’s highest pixel density projection chip that will enable future 4K2K projectors to be smaller, lighter and more affordable. The 4K2K device chip will deliver images that are more than 4 times the resolution of high definition. JVC is previewing the device and at InfoComm 2007 in Anaheim, CA, April 19-21 at the JVC booth #3504.

The 4K2K D-ILA device offers the world’s largest number of pixels, 4096 x 2400 – about ten megapixels – and a high 20,000:1 contrast ratio, providing images at an unparalleled resolution.

“Introduction of a 4K2K device this small is truly a breakthrough in the industry and a much needed technology,” said Jack Faiman, vice president of JVC’s display division. “An extremely high contrast ratio provides the stability and resolution needed in crucial applications such as flight simulators and robotic surgery.”

With respect to computer modeling, computer design systems can now present designers with four times the detail of present HD based systems, particularly important in automotive and airframe design.

In the medical device industry, the high native contrast, accurate grayscale gradations, and unmatched resolution of JVC’s 4K2K D-ILA technology, will allow systems that have been traditionally film-based to migrate to digital technology. This is especially important in medical education, and robotic surgery.

Additional technical information can be found on the Victor Company of Japan announcement (http://pro.jvc.com/pro/pr/2007/infocomm/victor_release.html).