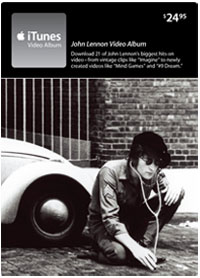 The collectible cards, distinguished with a silver-toned photo of Lennon, may be redeemed on the iTunes Store for a collection of music videos which includes Imagine, Woman, Happy Xmas, (Just Like) Starting Over, Nobody Told Me, Mind Games, two versions of Working Class Hero and others, many of which are available digitally for the first time.