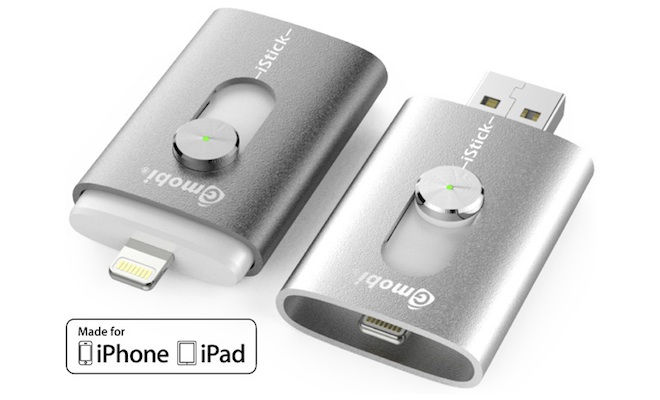 HYPER is seeking funding via Kickstarter for iStick — the world’s first USB flash drive with integrated Apple Lightning connector, allowing it to work with not only Mac/PC computers but with iPhone, iPad, iPod touch as well. iStick Kickstarter funding ends on June 17, 2014 and is expected to ship in August 2014 , priced from $129.

iStick is a USB 2.0 flash drive with both a USB connector as well as an Apple MFi Certified Lightning Connector that connects directly to recent iPhone, iPad and iPod touch models. iStick allows users to easily, quickly and safely transfer data between computers, iPhones, iPads and iPod touches without the need for iTunes, Internet, wireless networks or the Cloud where hackers and others (like NSA) may gain access.

HYPER was seeking $100,000 via Kickstarter to fund the iStick product. Funding began on May 12, 2014 and will end on June 17, 2014. The funding goal of $100,000 was met within 3 hours of launch. Now currently more than half a million dollars is raised in just 5 days since launch, with about a month left in the funding period. HYPER aims to ship the iStick in August, 2014. This is HYPER’s 2nd Kickstarter project after the successful CloudFTP which was the 3rd highest funded Kickstarter Technology project when it ended.

Daniel Chin, Founder and CEO of HYPER by Sanho Corporation says “We only reserve Kickstarter launches for our very best products just like what we did with CloudFTP 2 years ago. In addition to crowdsourcing funds, we also want to crowdsource ideas and suggestions to make the product even better and to give it the biggest launch possible.”

Pricing and Availability
The iStick is expected to ship in August, 2014 at the following prices:

Kickstarter Early Bird Backers will get the iStick for 50% off MSRP.