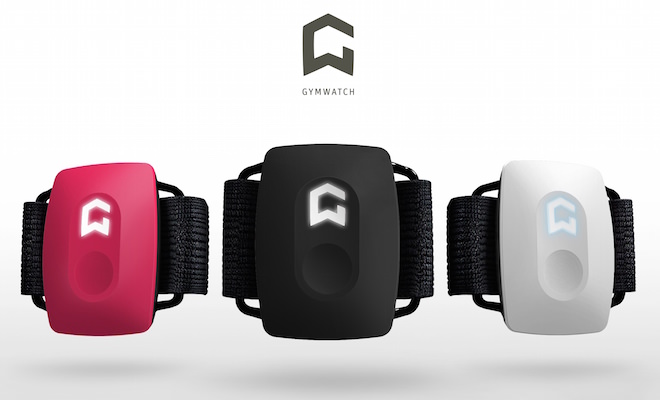 GYMWATCH today introduced the first wearable fitness tracker to measure both strength and motion for those that want to maximize their workouts to build muscle and strength and burn calories. The $200 GYMWATCH Sensor straps around either the user’s arm or leg muscles (or both with two sensors) to measure every strength component, including starting strength, maximum strength, explosive strength and speed strength, and also measures the precise motion amplitude in every exercise. The sensor can differentiate between full and partial repetitions and the time under tension of eccentric, concentric and static muscle contractions in exercises using free-weights, machines or the user’s own body weight. GYMWATCH tracks all of this data and using sports-science algorithms and mathematical modeling, factors it together with the user’s personal profile and fitness goals to design a personalized training plan that helps the user avoid overloading or under-loading their muscles and get the most benefit from their workout.

The GYMWATCH Sensor uses inertial sensors including an accelerometer, gyroscope and magnetometer to record the course of limb movements on all axes. It works with Bluetooth and Bluetooth Smart to communicate this data to the GYMWATCH app (iOS and Android). Users can also connect the sensor to their computers or other devices to view the training data and receive real-time feedback on any screen at home or in the gym. The app synchronizes with a web portal, which offers extensive training-management functions that use scientific algorithms to help users plan and analyze their training. An open API allows users to connect GYMWATCH to other fitness or medical applications, and users can also share their training results with other GYMWATCH users on social networks.

Added to GYMWATCH’s unique ability to precisely measure both strength and motion is its ability through a companion app to offer real-time verbal and visual feedback so that users can immediately find out if they are correctly performing any of the more than 900 exercises in the GYMWATCH catalog. For example, GYMWATCH might detect a user doing bench presses too quickly or doing squats too slowly for optimal benefit and will offer suggestions both verbally and visually for how to modify the exercise. The GYMWATCH app provides a figure illustration that demonstrates the correct form and pace. GYMWATCH users can follow the personalized training plan, or they can choose “Free-Mode” to perform and track any combination of the 900 exercises. They can also choose the ”Routines-Mode” to design specific, repeatable routines that focus, for example, on exercises to build abdominal muscles, or strengthen the back or burn extra calories.

GYMWATCH co-founder and CEO Fabian Walke began developing the GYMWATCH Sensor in 2010 when he was working on his thesis in sports science and informatics at the Technical University of Darmstadt in Germany. Noting at that time that the most sophisticated electronic fitness equipment was available only on stationary equipment, he set out to develop a sensor that could precisely track all relevant training data in every type of exercise, and then based upon extensive model-based analyses, provide users of all athletic abilities with real-time feedback. In 2013, Walke co-founded GYMWATCH with information technologist and CTO Thorsten Kruse, and after patenting the sensor; garnering numerous European design and innovation awards for it; securing funding support from several European governmental agencies; and conducting a successful crowdfunding campaign in 2014, the company is launching the GYMWATCH Sensor today.

“I noticed whenever I was working out at the gym, that people were either performing their exercises too hectically and on the wrong motion axes, which caused them to overexert themselves, or they were barely breaking a sweat, which indicated to me that they were not working out at an optimal intensity level. With the GYMWATCH Sensor, we’re aiming to help people hit the exact right target for their unique fitness ability and goals. GYMWATCH can show them the correct execution of movements and also determine the appropriate burden acting upon their body so that they can achieve the results they want, whether they are die-hard or aspiring fitness buffs,” said sports-science expert Fabian Walke, inventor of the GYMWATCH Sensor and co-founder and CEO of GYMWATCH GmbH.

Pricing and availability
The GYMWATCH Sensor is available to purchase at www.gymwatch.com. A single sensor is priced at $199 USD and a duo package is priced at $389 USD.

About GYMWATCH GmbH
Founded in 2012, GYMWATCH GmbH develops advanced fitness technologies and devices. Based in Darmstadt, Germany, near Frankfurt, the company’s first product is the patented GYMWATCH Sensor, which is the first and only wearable fitness tracker that precisely measures both the motion and the strength expended in every exercise, and with its companion app, provides real-time feedback to help users perform exercises properly and get maximum results from their workouts.