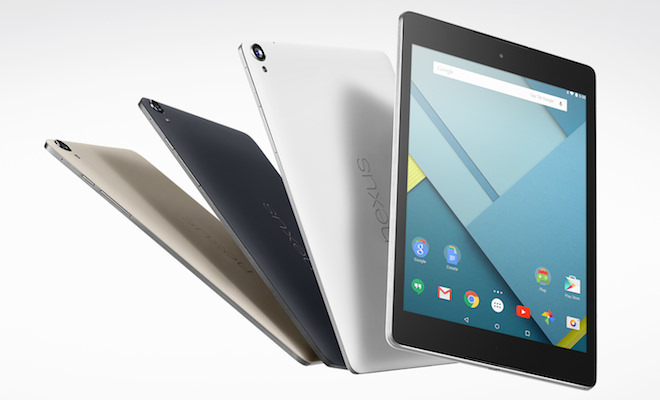 Google and HTC announced Nexus 9, a 8.9-inch tablet starting at $399, which will be the first to run Android 5.0 Lollipop — the next Android operating system release. The powerful tablet boasts an Nvidia Tegra K1 64-bit dual-core processor that makes switching between tasks both simple and fast, while its Keppler GPU delivers desktop grade performance and graphics in tablet form.

Front (1.6MP) and rear (8MP) cameras allow key moments to be captured as they happen, with the Nexus 9 tablet’s 2K screen (2048×1536) resolution delivering sharp detail and vibrant colors when viewing photos, browsing the web or watching videos. Dual front facing speakers feature a dedicated smart amp and HTC BoomSound profile for speaker mode, to enable stereo sound from the front of the device – perfect for music and gaming fans.

Designed to make the most of the very latest Android Lollipop operating system, the Nexus 9 comes packed with features that make multi-tasking a breeze, while allowing for a high level of personalization and security through a range of secure login functions. Its extended battery life means you can spend more time playing and less time charging.

Encased in a brushed aluminum frame that seamlessly connects the screen to a soft-grip back, the Nexus 9 is both sleek and polished, showcasing HTC’s expertise in precision metal work. The Nexus 9 tablet also has an 8.9″ display with 4:3″ viewing ratio that is large enough to master any task, yet small enough to hold comfortably in one hand. Weighing just 436g, it is also lightweight and easily portable.

Price Availability
The Nexus 9 is now available for pre-order and will ship November 3, 2014.