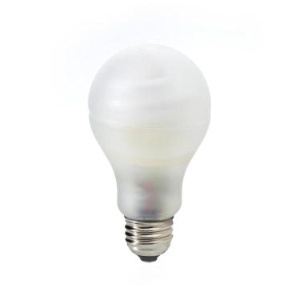 Miniaturized electronics developed by GE Consumer & Industrial engineers and scientists are the enabling technology of a new covered GE Energy Smart compact fluorescent light (CFL) bulb featuring the GE Spiral CFL inside the glass bulb. With this new CFL–an exclusive design achievement that GE has protected with more than a dozen U.S. patent applications–the electronics fit in the neck of the bulb. The result is a profile that’s virtually identical to a standard incandescent light bulb.

The new covered GE Energy Smart CFL bulb, a product of ecomaginationSM available only from GE, debuts nationwide at Target on December 28, 2008, at selected Ace Hardware stores in January, and more broadly around Earth Day (April 22, 2009) at retailers such as Sam’s Club and Walmart. It expands GE’s family of energy-saving, long-life CFL bulbs, which includes daylight and dimmable Spiral CFLs, 3-way CFLs, and decorative covered CFLs with the GE Spiral CFL on the inside. Each has instant-on technology and delivers the light quality consumers have come to expect from GE.

“These fit in more lamps and fixtures than standard GE Spiral CFLs with the plastic base,” says Kathy Sterio, general manager of consumer marketing, GE Consumer & Industrial. “Some people just want an incandescent bulb profile so they can easily use it with clip-on lampshades or smaller table lamps. Other people may see it as more aesthetically pleasing than GE Spiral CFLs in lamps or fixtures where the bulb is visible. It provides a more finished or tailored look that appeals to a lot of consumers.”

Additional wattages coming soon
Between April and June 2009, GE plans to introduce 9-watt and 20-watt incandescent-shaped covered GE Energy Smart CFLs, 40-watt and 75-watt equivalents, respectively. Each will offer an 8,000-hour rated life and 5-year guarantee based on 4 hours of daily use. The 20-watt CFL will have a slightly taller profile that mirrors a standard incandescent 3-way bulb. A 100-watt equivalent, incandescent-shaped covered GE Energy Smart CFL and other inventive products for household applications could be introduced as early as 2010.