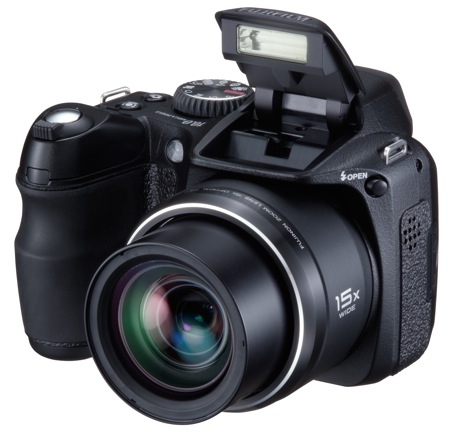 Sporting a 10-MegaPixel 1/2.3″ CCD, a powerful 15x wide-angle optical zoom (27.6mm-414mm equivalent) and an extra large 2.7″ wide-view LCD, the FinePix S2000HD is perfect for advanced amateur photographers who want an affordable, step-up digital camera that will still fit in the palm of their hand.

HD Compatible
With the ability to capture still pictures in 10-MegaPixel resolution, and movies in HD quality 1280x720pixels, in a true widescreen 16:9 aspect ratio, the S2000HD will change the way people think about digital photography. The S2000HD, via a new signal processor, converts still images and movies in-camera into a HDTV signal output compatible with 1080i (interlaced) for still and 720p (progressive) for movies thus allowing the user to realize the full benefits of their home theater system for sharing all their special moments. An HDTV set is needed to display high-resolution images at their best, but images captured in the 4:3 aspect ratio of regular digital cameras become distorted when forced into the 16:9 ratio of an HDTV monitor. The FinePix S2000HD avoids this problem by being able to capture images in a 16:9 format, enabling distortion-free, full screen playback for the sharpest, clearest display possible. Combine this with Fujifilm’s optional HD Accessory Kit, including wireless remote control that works with the shooting mode, and you maximize your HD experience.

“With the rapidly increasing adoption of HDTV, consumers have changed how they use their digital photographs and movies. Fujifilm’s superior image quality of the S2000HD enables the user to capture still images and shoot video in true HD and realize the benefit of superior image quality with their home entertainment system,” said David Troy, marketing manager, Consumer Digital Cameras, Electronic Imaging Division, FUJIFILM U.S.A., Inc. “With the FinePix S2000HD, users are not only getting an affordable, long zoom digital camera with a powerful feature set but also the ability to realize the full benefits of their home theatre system.”

What Digital Camera12 years ago