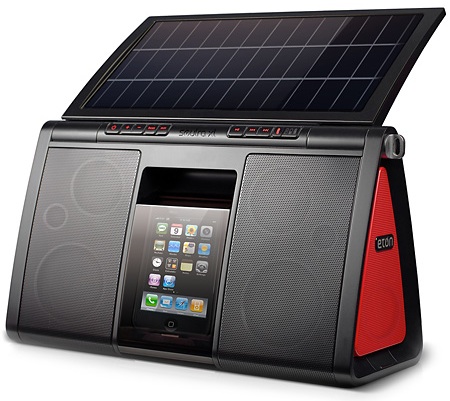 Eton introduced the Soulra XL solar-powered sound system for iPhone and iPod which features an enhanced solar panel and eight speaker drivers, providing the ultimate hybrid of portability and exceptional sound to charge and play iPhone and iPod.

The Soulra XL dominates all other solar-powered products with its efficient charge and play capabilities, featuring a massive, 72-square-inch enhanced monocrystal solar panel. Designed for charge-and-go use, the internal, rechargeable lithium ion battery can be charged via the foldout solar panel or the included AC adapter. Soulra XL requires about five hours in direct sunlight to fully charge and can provide playback for more than eight hours, depending on conditions. With the unique ability to also charge iPhone or iPod while playing, Soulra XL can keep you powered all day.

“Soulra XL is an iPhone and iPod dock you may never have to plug in. With the versatility and portability of Soulra XL, the sound system is the perfect addition to any indoor or outdoor area,” said Esmail Hozour, CEO of Eton Corporation.