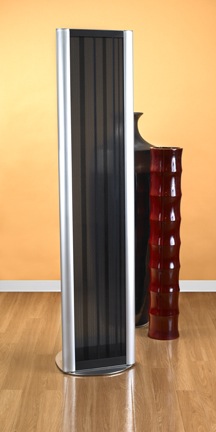 Essence just announced the world’s first full-range electrostatic loudspeakers to use acrylic stators. The Model 1200 floorstander is 48.8” tall, 11.5” wide, 1” deep and doesn’t use woofers, tweeters or cross-overs. Instead it uses transparent film to move air for sound reproduction. The speakers can be wall-mounted, but come with stand.

Other electrostats are forced to use a “hybrid” design to reproduce the bass, mid-bass, and lower mid-range sounds up to 400 Hz in a separate box housing a woofer with its own amplifier. The electrostatic portion of the audio band is usually unable to reach below 400 Hz. This compromise has been around a long time, acceptable to most, but no longer the only option.

By using new materials, production techniques, and years of exhaustive experimentation, Essence has found a way to move more air in less space to extend the low frequency capability of their entry-level electrostats down to 50 Hz, eliminating some of the most expensive parts and costs at the same time. This feature is revolutionary; no electrostat since the KLH 9 has been full range in this price category, and the Essence has far more low frequency output than its famous predecessor. The frequency response of the Model 1200 is ±3 dB from 48 Hz to 23 Khz.

Reached at his office in St. Petersburg industry-veteran Bob Rapoport, who will handle the sales and marketing, said “It’s not every day a new speaker comes along that pushes the art forward substantially, most improvements are incremental and fail to live up to their own hype. This is different. The new Essence is full range, it reproduces the most important octaves of fundamental sound. Because of its low-mass thin film diaphragm, it can turn the digital signal into sound much faster and cleaner than typical box speakers, its moving mass is literally 1/100th that of the typical electro-magnetic transducer. Now we have electrostatic bass, an elusive design goal for decades. No dis-respect to the other brands, but they are all hybrids, a significant compromise. Only Essence is full range”.

Availability
Essence will be available for $3,995 per pair MSRP in May 2013 through the finest audio and video specialists and custom integrators serving both the consumer and pro markets. For an extra charge, Essence can make the acrylic stators in Clear, Blue, Red, Orange, and Green.