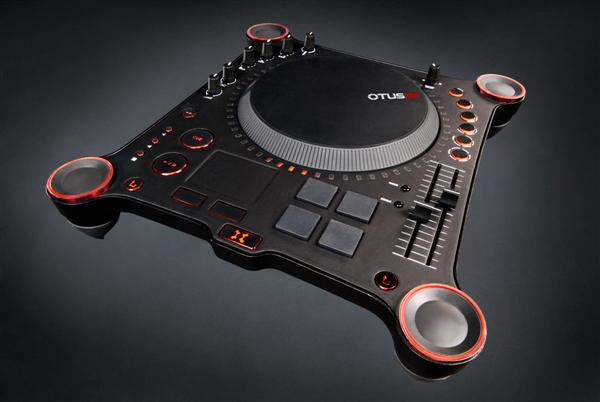 EKS, creators of the world’s most innovative and fully configurable DJ controllers, is proud to announce the debut of their latest innovation – Otus RAW. Designed to work as a single or dual deck controller, EKS’ Otus RAW will contain many new features that were requested by professional DJs from around the world. Otus RAW is also designed to fully utilize the possibilities offered by today’s and tomorrow’s DJ software.

Unlike the original Otus, Otus RAW is equipped with two long and sturdy SL-turntable-style pitch sliders, one for each virtual deck. The Otus RAW also features large velocity pads and buttons allowing for fast and easy operation in a hectic club environment. A layer switch immediately multiplies the layers of controls available on the Otus RAW, resulting in nearly an unlimited number of control possibilities. As with all EKS controllers, the Otus RAW will boast a future proof control ideology that makes the Otus RAW the most highly configurable controller for DJs today and for many years to come.

“The concept for the Otus RAW was simple: take feedback from the world’s most well respected DJs on the original Otus and incorporate it into the design of Otus RAW,” commented Sulevi Seppanen, EKS’ Sales Director. “The original Otus is still one of the finest controllers on the market, but we realize that some DJs prefer the physical control of a SL-turntable-style slider as opposed to a touch sensitive slider. Between the Otus RAW and the original Otus, I believe our engineers have created two of the marquee controllers on the market today.”

The Otus RAW will be available for sale this spring; pricing has not been set at this time.

About EKS:
EKS was founded in 2000 by a select group of audio engineers, DJs, producers and software engineers who set out to create a new standard in digital DJ controllers. Out of this, the XP10 and later the XP5 were born and instantly met with great acclaim by the industry’s best. Most recently, EKS engineers completed development of the most innovative and fully configurable controller ever conceived – the Otus. While new to North America, the Otus is acknowledged by many of Europe’s most well respected industry magazines and professional DJs as the most cutting edge controller on the market.