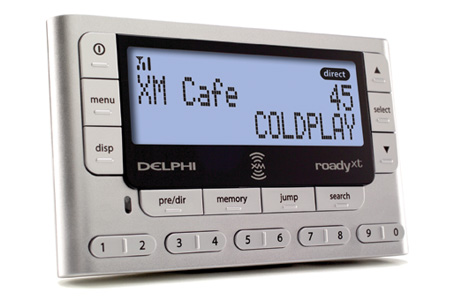 The Smallest, Thinnest Satellite Radio Ever

“The Delphi RoadyXT sets a new standard for size, elegance and functionality,” said Joseph A. Damato, director, consumer electronics, Delphi Product & Service Solutions. “With its new features and extra thin design, RoadyXT continues in that tradition representing one of, if not, the best consumer values for satellite radio receivers in the market this fall.”

XM Satellite Radio subscribers can listen to XM’s 150-plus channels of commercial-free music and premier sports, talk, news, and entertainment programming on the RoadyXT, which can be self-installed quickly and easily in the car or home.

The sleek, compact RoadyXT comes with everything you need for use in the vehicle. The product has a built-in FM transmitter, which will make any FM radio an XM radio by wirelessly transmitting XM Satellite Radio to any one of 100 FM radio frequencies, no cassette deck necessary. The RoadyXT is a true Plug & Play for easy installation in any vehicle or at home with the purchase of optional accessories. Compared to previous Roady models, RoadyXT has a brighter, higher-contrast display screen and seven vivid color displays. The unit also offers direct channel entry with backlit keys for improved visibility and ease of use.

In addition to displaying the channel name, artist name, and song title on each XM channel, the RoadyXT has a customizable sports ticker that displays the latest scores and schedules for professional and college sports. It also has a customizable stock ticker for keeping track of up to 20 stocks, and the popular TuneSelect feature, which alerts the listener when favorite songs and artists are played on any XM channel.

“The RoadyXT is proof that good things can come in small packages,” said XM’s Senior Vice President of Product Marketing and Distribution Dan Murphy. “Not only is it the smallest, thinnest XM Satellite Radio to date, but the addition of sports ticker and the 100 channel FM transmitter makes the RoadyXT the most advanced XM receiver in the popular Roady product line.”

The RoadyXT and included accessories will arrive at retail stores in late September 2005 and will sell for a suggested retail price of $99.99.

Additional RoadyXT accessories sold separately will include home stereo kits, portable rechargeable battery and headphone kit, and boomboxes. The RoadyXT with the home stereo kit will also be compatible with the new Delphi XM Signal Extender (SA10116), introduced a couple of months ago.

The Delphi XM Signal Extender is the first system that wirelessly rebroadcasts the XM satellite signal throughout the home. Innovatively designed, the system includes both a transmitter and a repeater antenna. The transmitter rebroadcasts the signal from any XM home antenna up to 75 feet away, even through walls and floors. While in range, one or more repeater antennas can acquire and convert the signal just like the home antenna for any XM radio. The Signal Extender is easy to install and with its sleek design integrates into the home environment. It is compatible with Delphi’s complete line-up of satellite radio receivers, home kits and audio systems, which includes the MyFi, Roady and SKYFi family of products.

About Delphi
Delphi was the first company to integrate a radio into the dashboard in 1936, the first to bring satellite radio to the vehicle in 2001, the first to bring a portable satellite radio to the market in 2002 and to date, Delphi has sold more than 6 million satellite radios – more than any other manufacturer. Delphi continues to expand its in-vehicle and consumer electronics technologies. Delphi has a broad portfolio of products to answer a wide variety of information and entertainment needs. For more information, visit http://www.delphi.com/media.

About XM Satellite Radio
XM is America’s number one satellite radio service with more than 4.4 million subscribers. Broadcasting live daily from studios in Washington, DC, New York City and Nashville at the Country Music Hall of Fame, XM’s 2005 lineup includes more than 150 digital channels of choice from coast to coast: the most commercial-free music channels, plus premier sports, talk, comedy, children’s and entertainment programming; and 21 channels of the most advanced traffic and weather information. XM was named Best Radio Service at the 2004 Billboard Digital Entertainment Awards.

XM, the leader in satellite-delivered entertainment and data services for the automobile market through partnerships with General Motors, Honda, Toyota, Hyundai, Nissan and Volkswagen/Audi, is available in more than 120 different vehicle models for 2005. XM’s industry-leading products are available at consumer electronics retailers nationwide. For more information about XM hardware, programming and partnerships, please visit http://www.xmradio.com.