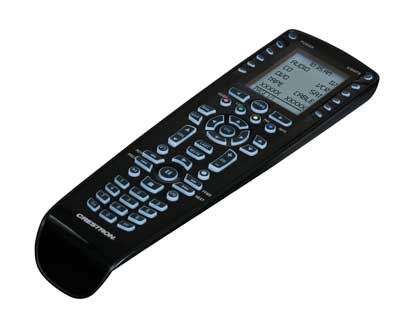 A large, easy-to-read LCD screen displays dynamic text, supporting scrolling menus of channels, media titles and numerous other commands. The screen can also show the time, lighting levels, room temperature, and other real-time data. The pushbuttons and LCD both have electroluminescent backlighting to provide optimal visibility in a range of lighting environments.

Static or dynamic text scrolls vertically for lists; horizontally for items such as metadata from AV sources. Environmental presets and conditions can be viewed and controlled, and audio and lighting levels appear in percentage or bar graph form. Windows SideShow™ is supported, providing access to all kinds of PC and Web-based content such as news feeds, sports scores, and weather alerts.

The required CEN-RFGW-EX infiNET EX™ gateway stores and processes all the programming, data, button presses and display changes for up to 16 MLX-2 remotes. As a result, each unit draws very little power. The gateway continuously synchronizes with the control system to seamlessly communicate with any MLX-2 on the network. Using repeaters, the MLX-2 operates up to 400 feet, perfect for roaming applications.

About Crestron
For nearly 40 years Crestron has been the world’s leading manufacturer of advanced control and automation systems, innovating technology and reinventing the way people live and work. Offering integrated solutions to control audio, video, computer, IP and environmental systems, Crestron streamlines technology, improving the quality of life for people in corporate boardrooms, conference rooms, classrooms, auditoriums, and in their homes.

Crestron’s leadership stems from its dedicated people who are committed to providing the best products, programs and services in the industry.

In addition to its World Headquarters in Rockleigh, New Jersey, Crestron has sales and support offices throughout the U.S., Canada, Europe, Asia, Latin America and Australia.