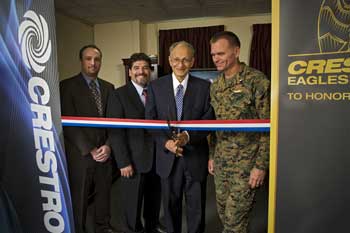 Camp Lejeune is an expansive base near Jacksonville, NC. Marines train in every aspect of combat — including land, sea and air — from this facility. It is home to Wound Warriors Battalion –East, which is comprised of 130 marines in various stages of recovery from severe brain injuries, amputations and traumatic stress disorders.

“You all think that we’ve done something special for you,” explained Mr. Feldstein, speaking to a group of Marines recovering at the base. “But this is really nothing compared to everything that you’ve done for us. This is the least we could do. I thank you for the opportunity to give something back to you to show our appreciation for your service and sacrifice.”

There was no shortage of admiration at the dedication ceremony, which was attended by nearly 100 wounded warriors. The event started with a prayer of thanks and dedication led by Chaplain Tim Williams, who blessed all who contributed time, effort and equipment to make this donation possible.

Captain Raymond Baronie, Alpha Company Commander and a double amputee himself, offered his gratitude to Crestron and Mr. Feldstein for creating the Eagles Program, and demonstrating leadership through altruism. “This is our home, and you’ve made it a lot more comfortable. We truly appreciate your support and generosity.” Captain Baronie presented the coveted Wounded Warrior Battalion — East coin to Mr. Feldstein, who accepted the honor with humility. “The coin has been given to only a select handful of generals,” continued Baronie. “Even the President of the United States doesn’t have one.”

Lt. Colonel Tom Siebenthal, Battalion Commander, then gave heartfelt thanks to AVI/SPL for installing the system, ICD for programming the system, and the other vendors for their contributions: Marshall Furniture (custom cabinet), Triad (speakers and stands), Velodyne (sub-woofer) and LG Electronics (Blu-ray player). Crestron donated an Adagio home theater system, CEN-IDOC interface for iPod, TPMC-8X Isys i/O WiFi touchpanel and a 52-inch HD plasma. Lt. Col. Siebenthal presented each donor with a personalized plaque recognizing their support and dedication to the Marines. “You didn’t have to do anything. But what you did was above and beyond. We are grateful to you for thinking of us, caring about us and all that you’ve done for us.”

Mr. Feldstein presented Lt. Colonel Siebenthal with the Crestron Eagles Program plaque in honor of our heroes. “If you notice the eagle on this emblem is facing to its left,” Feldstein points out. “On all other emblems the eagle faces to the right, which symbolizes power and strength. This eagle symbolizes compassion. Each one of us has responsibility to give back to our service men and women who courageously have made the ultimate sacrifice for our freedom, democracy and way of life. This country is a land of opportunity, but that opportunity comes with a price — which you all have paid on our behalf.”

After plaques and acknowledgements were graciously received, the official ribbon cutting was performed by HM3 (FMF) Dustin E. Kirby, a Navy Corpsman assigned to the battalion. Kirby received the Navy Cross when he was severely wounded in combat and performed a tracheotomy on himself in the field, then refused a stretcher and walked defiantly to the helicopter. His story of valor and courage is just one of many. Each of the Marines in the battalion has served and sacrificed. Everyone that participated in this project was impressed
and forever changed by these heroes.
The next hospitals scheduled to receive a home theater are Bethesda Naval Hospital and Wounded Warriors Battalion – West. “We have been overwhelmed by the response we’ve received from our industry. Installers and programmers call and email every day asking us if they can do the next one,” said Mr. Feldstein. “These first two installations [Walter Reed and Camp Lejeune] are just the beginning. This needs to be an ongoing program.”
For more information about the Crestron Eagle Program contact Pete Baca at pbaca@crestron.com. For additional high-resolution photos of the Crestron Eagles Program dedication ceremony at Camp Lejeune go to www.crestron.com/pressroom and select “High Res Photos and Logos” and then “Current Press Photos.”