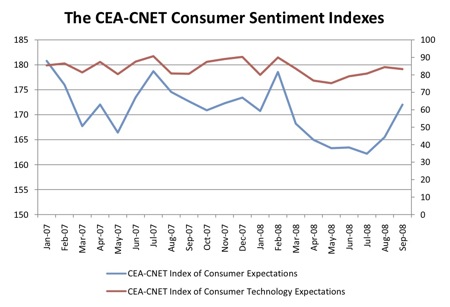 The CEA-CNET Index of Consumer Expectations (ICE) reached 172.0 in September, marking the third consecutive month of positive growth. The ICE grew six and a half points from August and saw a ten point jump from the all-time low set in July. The growth in September is the second highest reached this year. The ICE hit 178.6 in February.

“Despite the uncertainties presented by financial markets over the last few weeks, consumers continue to have a positive financial outlook,” says Shawn DuBravac, CEA’s economist. “Consumer sentiment responds most quickly to the uncertainties and risks consumers directly face. With two months of consecutive declines at the gas pump, consumers are expressing a bit of relief about their financial future.”

While overall consumer confidence climbing in September, confidence in technology and consumer electronics (CE) remained flat. The CEA-CNET Index of Consumer Technology Expectations (ICTE) fell to 83.2, just off from last month’s total of 84.4. The small decrease ends three consecutive months of positive growth. The ICTE, however, still remains more than two and a half points higher than this time last year.

“The consumer technology industry continues to remain a bright spot in the overall financial market,” says DuBravac. “Consumers continue to prove that consumer electronics are a vital part of their every day life. In fact, consumer spending on technology currently represents the highest level of spending on durable goods in nearly 50 years of historical data.”

The ICE and ICTE comprise the CEA-CNET Indexes, which are updated on a monthly basis through consumer surveys. New data is released on the fourth Tuesday of each month. CEA and CNET have been tracking index data since January 2007. To find current and past indexes, charts, methodology and future release dates, log on to www.CEACNETindexes.org.