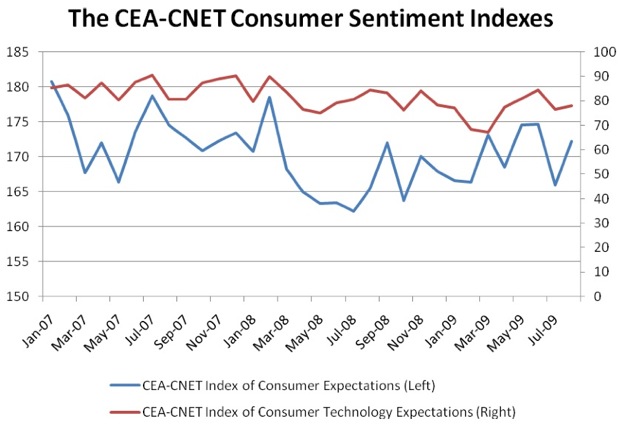 Consumer Confidence Rises in August, According to Latest CEA-CNET Indexes

The CEA-CNET Index of Consumer Expectations (ICE) reached 172.2 in August, a jump of more than six points from July’s yearly low. The ICE, which measures consumer expectations about the broader economy, is up six and a half points from this time last year and has climbed in three of the last four months.

The CEA-CNET Index of Consumer Technology Expectations (ICTE) also climbed this month. The ICTE reached 78.2, an increase of more than one and a half points from July. The ICTE, which has climbed in four of the past five months, shows that expectations for buying CE and spending more on CE products and services both went up in August. The ICTE remains down more than six points from this time last year.

“While consumers remain cautious, an increase in the dollar amount consumers are willing to spend is a positive sign for manufacturers and retailers,” said DuBravac. “Sentiment is improving at a crucial time in the year — as students head back to school and consumers begin to think about the holiday shopping season.”

The CEA-CNET Indexes are comprised of the ICE and the ICTE, both of which are updated on a monthly basis through consumer surveys. New data is released on the fourth Tuesday of each month. CEA and CNET have been tracking index data since January 2007.