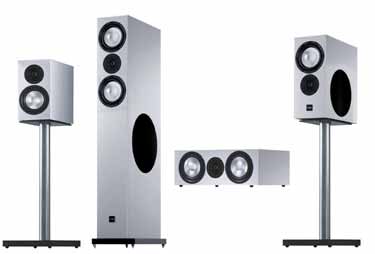 The most significant upgrade to the Karat M series is in the 1-inch aluminum-manganese tweeter, which employs a newly redesigned transmission plate front baffle for improved dispersion and linear response well above the audible range. Each speaker also employs Canton’s proven 6-inch aluminum cone driver for detailed reproduction of the critical midrange frequencies. This driver features an unusual concave dustcap, which provides improved imaging and multiple resonance paths for lower distortion.

Like the entire Karat line, the new M series speakers feature attractive cabinets with narrow front panels for improved line-source imaging in the midrange and upper frequencies. The three-way speakers use side-firing woofers to avoid excessive front baffle width. Each cabinet is constructed of extensively braced and damped MDF and is highly resistant to resonance. Cabinet finishes are available in graphite and silver lacquer, which is hand applied in numerous layers, as well as real wood veneers of cherry or beech.

The largest speaker in the M-series is the Karat M 90 DC, a three-way floorstanding speaker with a side-firing 10-inch woofer and a front baffle width of under 7 inches. The M 90 DC employs two midrange drivers vertically flanking a single tweeter for superior off-axis linear response. Bass performance is further enhanced by Canton’s DC (Displacement Control) Technology, which filters subsonic signals to prevent undesirable woofer excursions at very low frequencies, delivering more accurate and noticeably tighter bass while extending bass response by a full octave. The Karat M 90 DC is currently available at a suggested retail price of $1,500 each.

The Karat M 35 DC is an unusual three-way compact speaker that delivers full range performance with the size advantages of a compact monitor. It is under 7-inches wide, and a mere 15.4-inches tall, yet, thanks to its side-firing 8-inch woofer and use of DC technology, it is capable of linear bass reproduction comparable to many small floorstanding models. It employs a single midrange driver mounted above the 1-inch tweeter. The Karat M 35 DC is currently available at a suggested retail price of $1,000 each.

Canton’s Karat M 20 is a two-way compact model with a single 6-inch woofer and 1-inch tweeter. It is equally suited to use as a stereo pair, or as the front or surround channel in a dedicated multichannel music or theater system. The Karat M 20 is currently available at a suggested retail price of $600 each.

The Canton Karat CM 50 is a magnetically shielded speaker featuring two 6-inch aluminum cone drivers flanking a single tweeter. It features a sophisticated 2-1/2-way crossover, allowing it to function ideally as a horizontally-mounted center channel. The Karat CM 50 is currently available at a suggested retail price of $800 each.

Images and features available at:
http://www.gspr.com/canton/karat_m.html