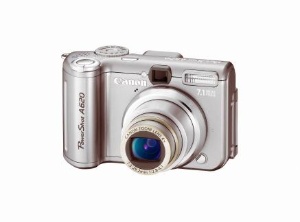 Whether it is Mom capturing memories poolside, Dad running back and forth on the soccer field taking photos of Junior’s big goal, or Grandma capturing memories of her grandchildren’s recent visit, Canon’s new compact PowerShot A620, A610 and A410 digital cameras provide both novice and entry-level photographers with a comfortable introduction to the fun and freedom of digital photography.

“For three years now, Canon has remained America’s number one choice(1) for digital cameras with the A70 model in 2003, the A75 model in 2004 and now the A510 digital camera in 2005,” said Yukiaki Hashimoto, senior vice president and general manager of the consumer imaging group at Canon U.S.A., Inc. “We are building upon the success of our A-series line by expanding our offerings. Our new PowerShot A620 and A610 digital cameras really pack professional-level features into consumer cameras, while the entry-level PowerShot A410 model is designed to meet first-time digital camera buyers’ needs.”

Powerful Features in Pocket-Sized Designs
The PowerShot A620 and A610 digital cameras feature a sleek new body design and powerful new features that lead the PowerShot A-Series line, without sacrificing the compact size, basic camera design and sensible control layout that have made other A-series digital cameras so popular. What’s more, the new cameras feature some of the most advanced specifications in their class, including:

— A full range of manual and 20 Shooting Modes including 8 Special Scene Modes plus a 2.0-inch vari-angle LCD screen

Thanks to DIGIC II and a brighter AF Assist beam, the PowerShot A620 and A610 digital cameras have reduced AF time by an impressive 60% and improved focusing ability by two full stops in low light conditions compared to their predecessor, thus enabling Dad to get the best quality picture as his child blows out his/her birthday candles. DIGIC II also makes the most of the cameras’ superb all-glass Canon optics and high resolution CCD sensors to deliver exceptional image quality with vibrant yet natural color, low noise and fine detail.

The PowerShot A620 and A610 digital cameras are equipped with a 9-point AiAF “Smart” autofocus system and 20 shooting modes. The standard Shooting Modes are Full Auto, Program, Shutter-priority, Aperture-priority, Manual, and Custom with additional modes including Portrait, Landscape, Night Scene, My Colors, Special Scene (including Night Snapshot, Kids and Pets, Indoor, Foliage, Snow, Beach, Fireworks and Underwater(2)), Stitch Assist and Movie. Both models are capable of recording 30 fps VGA movies with sound for up to 1GB per clip and 60fps QVGA fast frame rate movies for up to 60 seconds a piece, so families can capture their memories in motion.

Whether it is raising your camera above your head to get a shot of your child at her first dance recital or dropping your camera below your knees to watch your baby crawl for the first time, the large 2.0-inch vari-angle LCD screen, up from 1.8-inches in previous models, increases the ability to get those hard to view, but essential shots. There’s even a new, optional horizontal and vertical Grid Line function on the LCD screen that lets users compose their photos more accurately than before.

The PowerShot A620 and A610 digital cameras use four AA batteries, while providing more shots (up to 500 with LCD screen on, based on CIPA standards when using rechargeable NiMH batteries) than previous models, thanks to reductions in power consumption made possible by improvements in key components and circuit design. The PowerShot A410 digital camera uses only two AA batteries, yet captures up to 400 shots according to CIPA standards with the LCD screen on when using rechargeable NiMH batteries.

DIGIC II Image Processing Technology- Hi-Speed USB 2.0
True to the PowerShot tradition, the new PowerShot A-series cameras have many of the latest advances in Canon technology including the proprietary DIGIC II imaging processor. The processor enhances picture definition, vibrancy and quality, while helping increase the speed of the cameras’ startup, autofocus, shutter response, playback and image processing speed and reducing power consumption by 35% compared to the original DIGIC chip. Image transfer speed is accelerated (when used with a USB 2.0 compatible computer, printer or other peripheral), thanks to the inclusion of a Hi-Speed USB 2.0 port. The USB 2.0 port is backwards compatible (at no increased speed) with computers featuring standard USB 1.1 connections(3).

About Canon U.S.A., Inc.
Canon U.S.A., Inc. delivers consumer, business-to-business, and industrial imaging solutions. The Company is listed as one of Fortune’s Most Admired Companies in America and is rated #35 on the BusinessWeek list of “Top 100 Brands.” Its parent company Canon Inc. (NYSE:CAJ) is a top patent holder of technology, ranking third overall in the U.S. in 2004, with global revenues of $33.3 billion. For more information, visit http://www.usa.canon.com.

Specifications are subject to change with notice.

(3)The PowerShot A410 Digital Camera supports only Full-Speed USB 2.0, which has the same data transfer speed as USB 1.1.

(5)Based on Canon KP-108IP paper and ink pack manufacturers suggested retail price as of 6/15/05 and as compared to competitors’ similar products.

(6)Pricing is subject to change without notice at any time. All prices are set by individual dealers and may vary.