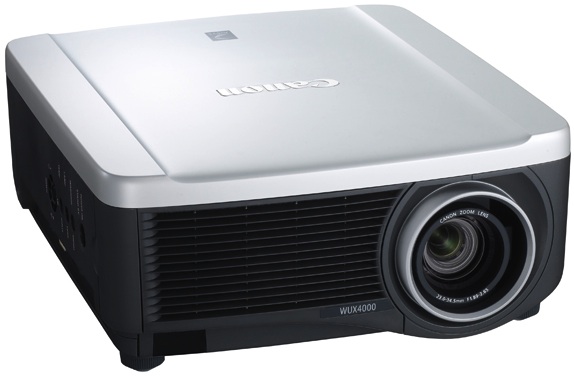 The fourth-generation AISYS-enhanced LCOS technology built into the REALiS WUX4000 projector exceeds the performance of earlier designs by providing 20 percent more brightness than the REALiS WUX10 projector (based on same lamp wattage and panel size) together with highly accurate color reproduction utilizing a newly-developed Canon Color Reproduction IC equipped with a 3D-LUT (Look-up Table). The advanced algorithms made possible by the 3D-LUT deliver a wide color gamut together with precision luminosity adjustment. A dynamic gamma feature can also optimize tonal gradation and contrast, which can be beneficial when displaying movies with low-contrast scenes.

Interchangeable Lenses Extend Versatility
Further contributing to the display excellence of the new REALiS projector, as well as to its installation convenience, are the three optional high-resolution interchangeable lenses available for the unit. These lenses – including a 1.5x Zoom, 0.8x Ultra Wide Angle single focal length, and 1.7x Long Focus Zoom – incorporate advanced low-distortion and high-resolution optical technologies originally developed for Canon's EOS DSLR camera lenses. Engineered to minimize brightness loss, each lens is the same physical length, due to the use of advanced Canon aspherical elements. This uniformity of length can simplify shipment of assembled projector/lens units for rental/staging companies, and avoid lens-overhang issues when mounted inside projector-lift systems.

Motorized Lens Shift and Other Convenience Features
Additional installation convenience is provided by the projector's motorized Lens Shift feature. This enables installers to overcome moderate projector-placement obstacles by shifting the lens itself to adjust the vertical and horizontal position of the projected image. (This is done using the projector's control panel or remote control.) The projector can be ceiling-mounted with a plate or extension pole using either Canon's mounting bracket or products from independent ceiling-mount companies. The projector can also be installed vertically or stacked.

The Canon REALiS WUX4000 Installation LCOS Projector's lamp and air filter assemblies can be expediently replaced from the side/back of the projector, and its optical filter element can be replaced from the top of the unit for added convenience and economy.

Multimedia Device Compatibility
Industry-standard digital and analog terminals and connectors ensure the REALiS WUX4000 Installation LCOS Projector's compatibility with a wide range of video and computer devices. Signal inputs include HDMI Version 1.3, DVI-D and analog PC terminals, two audio inputs, and one audio output for external amplification and speakers. A built-in five-watt speaker is also included. A convenient User Memory feature stores up to ten different setting combinations based on the content being shown. Five memory settings are for computer sources, such as DVI-D, analog PC, and HDMI (PC). The other five settings are for video sources, such as component and HDMI (video). A network-ready RJ-45 port allows for authorized users to manage and control multiple projectors from any PC on the network. An RS-232 serial connection allows for monitoring the projector locally through a third-party control system. A hand-held remote control enables users to control four WUX4000 projectors individually or simultaneously. Lens Shift and Gamma Control buttons are also included on the remote control.

Price and Availability
The REALiS WUX4000 Installation LCOS Projector is scheduled to be available through authorized Canon dealers in March, 2011 for $8,999.