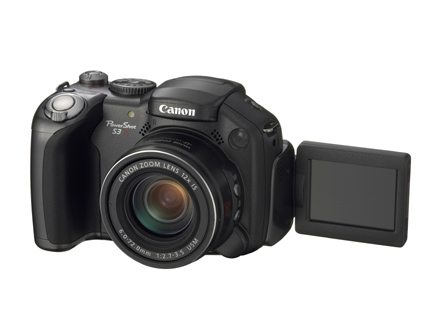 The family-oriented Canon PowerShot S3 IS is a feature-packed six-megapixel hybrid digital camera that is equally at home with photo enthusiasts and digital diehards as it is in the hands of the point-and-shoot “where do I press?” set. Remarkably, whether engaged in VGA quality videography at 30 frames per second (fps) with stereo sound recording, high-resolution still photography, or capturing both at the same time, this affordable and adaptable camera remains the ultimate example of “easy to use.”

The successor to the five megapixel PowerShot S2 IS digital camera, the PowerShot S3 IS enhancements begin with Canon’s newly designed six-megapixel image sensor that together with Canon’s proprietary DIGIC II image processor dramatically reduces “noise” for better image quality and achieves ISO equivalent speed ratings ranging from 80 to 800. This increased sensitivity allows the use of faster shutter speeds, thereby reducing the effects of camera shake and subject blur during hand-held photography in low light.

Adding to that unshakeable quality is the PowerShot S3 IS digital camera’s shift-type optical image stabilization system. Unlike electronic image stabilizer systems that typically cause degradation of image quality, Canon based its Lens Shift type of Image Stabilizer system on the advancements in the development and refinement of Canon’s EF and video lenses.

This Image Stabilizer provides up to three stops of camera shake correction in shutter speed equivalent. It is essential when engaging the camera’s retractable 12x optical zoom lens because the extension of a long lens magnifies camera shake in direct proportion with the amount of lens magnification employed. (For those seeking still greater optical capabilities, Canon offers an optional 1.5x Tele Converter, a 0.75x Wide Converter and a high-quality dual element Close-Up Lens).

The PowerShot S3 IS digital camera’s 12x zoom lens has an equivalent film focal length of 36-432 mm (f/2.7 at wide angle and f/3.5 at telephoto). Despite the extraordinary range of the zoom lens, it retracts securely into the camera when it is powered down. The optical zoom can be augmented by the camera’s 4x digital zoom raising the maximum (35mm equivalent) focal length to that of a 1728mm lens. What’s more, this UD lens features a high-speed silent zoom function powered by a micro motor USM drive, increasing ease of quiet, non-intrusive image capture. For extreme close-ups, the camera’s macro and super macro mode permit shooting a subject as close as zero inches from the end of the lens barrel.

Movie Mode
In addition to recording in high-quality VGA (640 x 480 pixels) movie mode at 30 fps, the user can increase the frame speed to 60 fps in QVGA (320 x 240) movie mode. Similarly, the camera also features a QVGA 320 x 240-pixel setting with a choice of 30 or 15 fps. Continuous movie recording is possible up to a maximum file size of 1GB or 60 minutes, whichever comes first, (depending on the capacity of the user’s memory card and its data write speed). What’s more, regardless of the mode dial position or even whether the camera is in capture or playback mode, the PowerShot S3 IS camera automatically starts and stops recording movies with the simple press of a button on the camera back.

MovieSnap
Newly enhanced for the PowerShot S3 IS digital camera thanks to the model’s new six megapixel image sensor, MovieSnap enables the user to capture high-resolution six megapixel still images while recording movies, ensuring that memories of milestones are preserved for video view as well as for picture frames, photo albums and e-mail sharing.

True to its hybrid nature, the PowerShot S3 IS camera’s larger 2.0 inch Vari-Angle LCD screen swings out (as is common on video cameras) permitting the user to compose shots including self-portraits without having to twist and maneuver into uncomfortable positions.

DIGIC II Image Processing Technology — Hi-Speed USB 2.0
True to the PowerShot tradition, the PowerShot S3 IS digital camera has many of the latest advances in Canon technology including the proprietary DIGIC II imaging processor. The processor enhances picture definition, vibrancy, and quality, while helping increase the speed of the cameras’ startup, autofocus, shutter response, playback, and image processing speed while reducing power consumption by 35 percent compared to the original DIGIC chip. Consumers benefit from accelerated image transfer speed (when used with a USB 2.0 compatible computer, printer, or other peripheral), thanks to the inclusion of a Hi-Speed USB 2.0 port. The USB 2.0 port is backwards compatible (at no increased speed) with computers featuring standard USB 1.1 connections.

Additionally, the new model supports 23 languages (now including Thai and Arabic). The S3 IS camera has an improved direct printing function that permits greater flexibility in print settings, including a face brightener setting for backlit photos.

Pricing and Availability
Canon’s new PowerShot S3 IS digital camera will be available in May for an estimated selling price of $499.993.

Canon will debut the new PowerShot S3 IS digital camera in its booth (#3509) during the Photo Marketers Association (PMA) exhibit in Orlando, Fla., from February 26-March 1, 2006.

All referenced product names, and other marks, are trademarks of their respective owners.
Specifications are subject to change without notice.
1Print speed of up to 58 seconds is based on average output speed achieved during product testing with DIGIC II processor embedded Canon PowerShot digital cameras. Other products’ print speed may vary. Printer functions are sensitive to temperature and humidity.
2Information is based on Canon KP-108IP paper and ink pack, manufacturers suggested retail price as of 6/15/05, and as compared to competitors’ similar products.
3Pricing subject to change at any time Actual prices are determined by individual dealers and may vary.
You Are Here