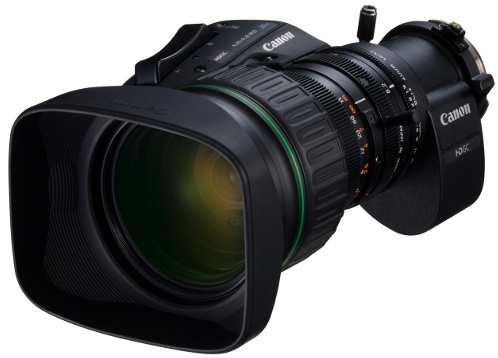 Canon has introduced the KJ20x8.2B portable HD lens specifically designed to support low-cost image acquisition systems for a wide range of applications and users, from broadcast ENG to professional freelance HD shooters. Leading the list of advanced features of the new lens is its built-in 2x extender, an important imaging feature previously seen on higher-end HD lenses. As a result, the KJ20x8.2B offers ENG shooters and other camera operators greatly improved subject-framing flexibility. The new KJ20x8.2B is also Canon's widest (8.2 mm) lens in the affordable 20x zoom class, and it covers a generous range of focal lengths, particularly when combined with its built-in 2x extender expanding its 8.2mm-164mm focal length to 16.4mm-328mm.

“Given its remarkable affordability, great flexibility, and innovative operational features, the new KJ20x8.2B is set to become the next generation's standard 2/3-inch portable HD zoom lens,” noted Larry Thorpe, national marketing executive, Broadcast and Communications division, Canon U.S.A. “Canon first introduced its HDgc series of HD portable lenses five years ago to provide high optical performance at competitive prices for the then-emerging generation of lower-cost portable HD video cameras designed for ENG and other types of programming. The HDgc product line has since grown into a broad range of portable HD lenses engineered to meet a wide range of production applications for lower-cost HD cameras and camcorders having either 2/3-inch, 1/2-inch, or 1/3-inch imagers. Now at NAB 2011, the introduction of the KJ20x8.2B marks a price-performance breakthrough for the many production applications seeking cost-effective HD acquisition systems based upon a new generation of low-cost 2/3-inch camcorders.”

The outstanding optical performance of Canon's new KJ20x8.2B portable HD lens is the result of Canon's world-leading design tools, including cutting-edge optical-simulation and 3D-design technologies, novel optical glass materials and coatings, and extraordinary dispersion glass (which Canon also uses for its flagship HDxs series lenses). Collectively these technologies and materials have facilitated an unusually high degree of optimization of the cost-performance ratio of the new KJ20x8.2B. The lens has minimized axial and lateral chromatic aberrations, coma aberrations, and geometric distortion. The new optical materials and multilayer optical coatings used for the KJ20x8.2B effectively attenuate optical artifacts such as ghosting, flare, and veiling glare that might be stimulated by strong light sources (for example, sun in daytime and car headlights at nighttime). The KJ20x8.2B exhibits a high MTF (modulation transfer function) at picture center that is also well controlled out to picture extremities. This high MTF is well sustained even with operational adjustments of focal length and object distance. The KJ20x8.2B's optical performance is well-balanced for both near and distant subjects, and its rendering of distant subjects at wide angles — frequently required for landscape and cityscape shots — surpasses previously available lenses in this price range.

The new lens features an enhanced macro function that effectively reduces the minimum object distance (from the front of the lens) to only 10mm.

In addition to its optical sophistication, the new KJ20x8.2B portable HD zoom lens also features Canon's latest improvements in Advanced Drive Unit technology. This technology is famous for the convenience and control it affords to camera operators using Canon portable HD lenses. On the new KJ20x8.2B, Advanced Drive Unit technology includes Shuttle Shot, a Canon-exclusive technology that enhances production capabilities. At the touch of a button, Shuttle Shot allows the operator to rapidly zoom back and forth between any two positions. Shuttle Shot can be used to zoom to the telephoto position to check focus and almost instantly return to the original position, or users can “shuttle” between any two zoom-positions at any time. Users can set specific Shuttle Shot zoom positions using a simple “Memo” push switch; the switch enables more reliable Shuttle Shot set-up in the field, where more consistent functioning of the controls is required. The KJ20x8.2B's zoom can travel end-to-end in as little as 1.0 second, an improvement over the speed of previous models; although faster, new noise suppression on the servomotor inside the Advanced Drive Unit ensures very quiet operation.

The new Advanced Drive Unit also features an ergonomically re-designed, tilted shape for user comfort, convenience, and balance. The operator's tactile connection with the lens is enhanced by a ribbed surface on the bottom of the Drive Unit to ensure a firmer grip and better overall operational control. A new grip support allows users to securely grasp the drive Unit without inadvertently pressing on the VTR or Shuttle Shot buttons.

* Check with the specific camera manufacturer to determine whether their camera is compatible with KJ20x8.2B lens-aberration-correction functions.