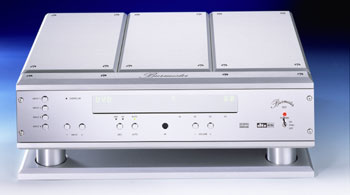 The two surround sound processors represent an important departure for the acclaimed two-channel specialist — Germany’s leader in high-end audio. Previewed earlier this year, they are now available for shipping, and comprise vital elements of a complete multichannel home entertainment system.

The 007 MK2 Reference Surround Processor is uncompromisingly geared toward delivering the highest sound quality without sacrificing ease of use. It features an external power supply with a video switch over, and sample rate conversion is applied on all channels. Dolby Digital Ex, DTS ES, DTS Neo6, and Dolby Prologic II are all standard.

New capabilities added since the processor was previewed earlier this year include a multi-room mode, and the ability to be used as a three-zone stereo preamplifier. Additional features include Burmester sample rate conversion (SRC), balanced amplification, DC coupling so no capacitors are in the signal path, custom selectable presets, individually set audio and video inputs, automatic overload control, and a handheld remote. The modular design ensures hardware and software upgradeability, so it will never become obsolete.

The 057 Top Line Surround Processor is a pure surround audio processor. It is also designed for uncompromising sound quality and ease of use. It shares many of the qualities of the 007, but at a more affordable price. Key features include compatibility with Dolby Digital Ex, DTS ES, DTS Neo6 and Dolby Prologic II, fully balanced amplification, DC coupling, individually set audio and video inputs, and automatic overload control. Like the 007, its hardware elements and software can be upgraded as needed.

Both components can be optionally equipped with the newest version of Burmester’s BurLinkTM interface, which features RS-232 and USB2.0 ports. It’s ideal for integrating the Home Theater with home automation systems, such as those from CrestronTM, AMXTM and other manufacturers.

Burmester’s 007 MK2 Reference Surround Processor will be available in October at a suggested price of $39,995. The 057 Top Line Surround Processor is available now at a suggested price of $19,995. They can be seen with Burmester’s other outstanding products at the Hilton Garden Inn Downtown, 1400 Welton Street (2 blocks from the Colorado Convention Center), during CEDIA EXPO.

About Burmester US
Burmester US is a wholly owned operation of Burmester Audiosysteme GMBH, Germany’s leader in high-end audio and one of the most respected names among manufacturers of high-quality stereo systems worldwide. Burmester’s product line goes back 30 years. Today, product lines include the moderately priced Rondo Line, the ambitious Classic Line, the Top Line (suiting listeners’ highest needs), and the no-compromise Reference Line. These lines include pre amplifiers and power amplifiers, multichannel amplifiers, integrated amplifiers, CD and DVD players, surround sound processors, FM tuners, power conditioners, speakers, and accessories for both two-channel and multichannel systems. Burmester offerings vary in price but never in their dedication to quality and musical performance at the highest level. All Burmester components fulfill the most stringent demands with respect to sound quality, reliability and ease of use, and all are beautifully, elegantly finished.

Burmester is also the appointed, exclusive partner for Bugatti to supply the sound systems for the $1.4-million Veyron 16.4.

For further technical information, visit www.burmester.de, or call Burmester US at 877-287-6310.