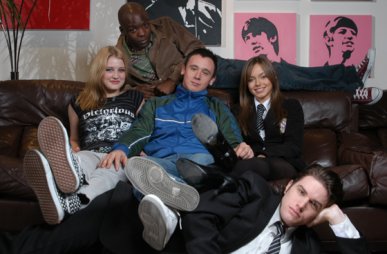 Farringdon Road Films announce the UK launch of ‘Brick-it’ the first soap series to be made exclusively for mobile phones. The series will launch at the end of January 2006 with a new five minute episode available every weekday to all video enabled phones.

This is the first time that a team with experience in television and feature films has turned its skills to the very different mobile platform. The series also boasts some of the best young actors in the country, whose experience ranges from Harry Potter to Eastenders. The content guarantees to show off 3G capabilities at their best while remaining impactful on 2½G devices.

This is the first ongoing video content to be produced specifically for mobile devices, with an emphasis on close-ups and a fast-paced plotline that takes as much from 24 as Hollyoaks. The distribution deal for ‘Brick-it’ has yet to be finalised, and the company is adamant that episodes should be affordable and its users protected from hidden charges and mobile spamming. Subscribers will be able to watch it anytime and anywhere throughout the day.

Farringdon Road Films series director Henry Mason comments ‘This represents a major step-change in the production of downloadable content. Written and shot entirely for mobiles, we have produced an exciting and highly addictive soap series that people will be able to watch wherever they are, whenever they have five minutes to spare. This is surely the future of entertainment.’