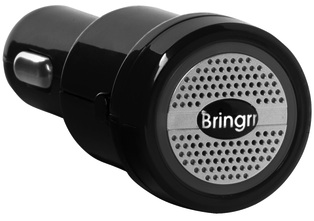 With the launch of a new product called Bringrr, today the chances of forgetting or losing your cell phone have been greatly reduced.

Cell phones are an increasingly integral part of our lives, used not only for calls but for everything from e-mail to social networking to GPS to photography. That's not to mention the tens of thousand of applications available for smart phones. Surveys show that 80 percent of consumers admit that occasionally forgetting their phone is a problem. Thirty percent of consumers said they would pay $30 to solve that problem, ensuring that the “phone reminder” accessory category, represented by Bringrr, will be a growing one.

“In today's fast-paced mobile lifestyle, leaving your cell phone behind is something that everyone can relate to, particularly me,” commented Rob Enderle, president and principal analyst of the Enderle Group. “Bringrr has developed a simple device that gives its users an added safety net, helping to assure their critical cell phone is with them when they drive away. This is one of the few technologies that actually provides me (and possibly a CEO who runs a company named after a fruit) with one less thing to worry about; a forgotten phone.”

Pricing and Availability
Bringrr will be available in mid-July 2010 at www.bringrr.com. MSRP is US$35.

About Bringrr
Bringrr is an innovative consumer electronics company headquartered in New Hampshire. Started in 2009 by James Logan, Bringrr is dedicated to developing new and simple accessories geared at helping consumers improve their day-to-day lives.