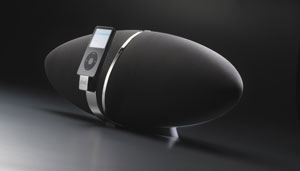 “Applying Bowers & Wilkins’ considerable expertise to the task of iPod playback has yielded impressive results,” says Bowers & Wilkins’ Executive V.P. Business Development, Evert Huizing. “Several Bowers & Wilkins core technologies enabled us to offer a quantum leap in performance and to do it from a tremendously cool-looking component. Consequently, Zeppelin will be positioned to introduce a truly high-end sonic experience to many listeners who might otherwise not encounter it, which is good for Bowers & Wilkins and good for audio and music in general.”

The Bowers & Wilkins Zeppelin is a one-piece amplified speaker system and docking station that transforms an iPod into an astonishingly capable yet highly compact stereo music system. Barely two feet wide, with a dramatic, tapered shape and beautifully finished in polished stainless steel, Zeppelin sets a new benchmark for both audio fidelity and appearance in this rapidly growing field. Certified as “Made For iPod” by Apple and with its form created by international award-winning industrial designers Native Design Ltd. of London, Zeppelin offers the ideal music system for office, bedroom, kitchen, or a second home.

The seductive design is also purpose driven. Zeppelin’s tapered ends house the midrange and tweeter drivers in much the same way as the famous “pods” of Bowers & Wilkins’ world-class 800 Series loudspeakers, presenting a carefully curved profile that ensures a smooth response and even distribution of sound into the room. Each pair of midrange and tweeter drivers is spaced as far as possible to left and right to maximize stereo separation. Low frequencies are handled by a single five-inch “subwoofer” located in the center, its bass performance enhanced by the twin rear-firing ports. Three channels of amplification, each incorporating proprietary DSP (digital signal processing) tailored to fine-tune response of the five drivers, deliver real high-fidelity power: 50 watts for the woofer and 25 watts for each two-way mid/high-frequency section. The result: deep, loud, startlingly dynamic sound reproduction – reflecting its serious high-end audio credentials.

Zeppelin is world-ready, automatically accepting any AC power standard from 100-240V. Its smart 30-pin docking port accepts latest-generation iPods without requiring an adapter or interchangeable bases, thanks to its unique, spring-loaded design. The “floating” arm design allows the user to grasp a docked iPod, making it as easy to operate as when hand-held.

Zeppelin comes complete with a pebble-like, mini remote handset to provide even more convenient control of volume, source select and mute, working seamlessly with the iPod to command its play/pause and track-selection functions. When docked, the iPod also accesses a special Zeppelin “Speaker” menu, with five-position bass EQ to tune response for system placement or individual preference. Zeppelin’s rear S-video and composite-video outputs deliver iPod video to a big screen, and a combination analog/digital mini-jack input offers Zeppelin playback of virtually any non-iPod audio source. Also included is a dedicated tilt-base, to place the Zeppelin at the acoustically ideal angle for seated or standup listening.

Zeppelin will be available from September 2007, at select Apple Stores nationwide and online (http://store.apple.com), at a manufacturer’s suggested price of $599.00.

Bowers & Wilkins is Britain’s leading exporter of loudspeakers and the number one imported brand in North America. Since 1966, Bowers & Wilkins’ “Quest for Perfection” has resulted in a succession of technical loudspeaker innovations that have satisfied the world’s most demanding listeners. Its products’ rave reviews and universal acceptance as monitors for classical music recording have helped Bowers & Wilkins become the dominant premium loudspeaker company throughout the world.

iPod is a registered trademark of Apple Inc.
All rights reserved.