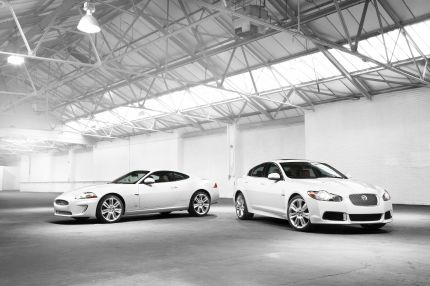 At the Detroit Auto Show in January, Jaguar unveiled the 2010 XKR and XFR automobiles and announced that the exclusive award-winning Bowers & Wilkins premium audio system would be available as standard equipment. The ongoing partnership of the two British icons yields a benchmark audio system that has set the standard for both sonic excellence and operational elegance–a perfect reflection of the Jaguar tradition.

The Bowers & Wilkins automotive development team continues to build its program upon the same rigorous component specification and selection that the company has utilized for its long lineage of unexcelled home audio and home theater audio systems. Turning this expertise to the unique challenges of in-car system engineering and tuning ensures a consistent, and compelling musically engrossing entertainment experience for the driver and passengers alike.

The Jaguar audio systems features core Bowers & Wilkins elements, in particular its hallmark Kevlar midrange loudspeaker units, and famed low-distortion, high-performance aluminum tweeters. The Kevlar speaker diaphragms for the Jaguar systems were specially refined to preserve the trademark Bowers & Wilkins musical purity and detail, bringing listeners as close to the music as they might be a live performance–even in the challenging mobile environment. Unlike more conventional speaker designs, dispersion of accurate musical balance is much more uniform, bringing convincing sound to all the passengers. Aluminum tweeter domes were chosen because of their natural, distortion-free performance even under enormous dynamic demands giving the listener a more detailed and revealing listening experience regardless of moving speed and overall volume setting.

The XFR and XKR are two cars that are true to Jaguar’s legendary heritage performance, delivering a superb balance of automotive high performance, dynamic response and refinement. Both vehicles feature the all-new AJ-V8 Gen III direct-injection engines which promises to deliver more power and more performance with no loss in fuel efficiencies and a decrease in emissions.

Bowers & Wilkins experience and know-how has been applied all models of both vehicle ranges to ensure premium sound quality; standard in the XFR, XK Portfolio and XKR and available in the XF, XF Portfolio and XK.

About Bowers & Wilkins
Bowers & Wilkins is the world’s leading exporter of loudspeakers with a reputation for sound reproduction spanning over 40 years. The company and culture formed by John Bowers remains dedicated to the pursuit of ‘true sound’–nothing added, nothing taken away. As a testament to the results of its effort, B&W speakers serve as the audio reference in leading recording studios around the world, including London’s Abbey Road Studios. Bowers & Wilkins products are available from over 3,000 retailers in 62 countries around the world. In 2005 the company received the Queen’s Award for Innovation.