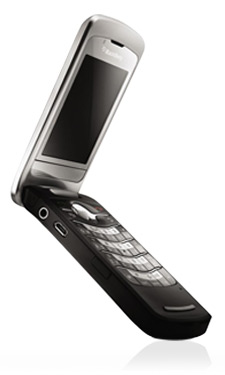 With wireless customers craving both style and functionality, Alltel Wireless announced today that the BlackBerry Pearl™ Flip 8230 smartphone from Research In Motion (RIM) will be available in retail stores and online at alltel.com beginning in early May. This stylish and compact smartphone puts customers in control of how, when and where they communicate and joins Alltel’s impressive spring line-up of phones that make perfect gifts for moms, dads and recent grads.

The clamshell design of the BlackBerry Pearl Flip 8230 smartphone allows users to discreetly screen calls and preview messages on the high-resolution external display or utilize the large internal display to respond to calls or messages, view maps and web pages, and play games. With a resolution of 240 x 320 pixels, the internal LCD displays videos and pictures in crisp detail and contrast.

“Alltel is committed to offering customers stylish and innovative phones, and the BlackBerry Pearl Flip gives customers the best of both worlds — a small, stylish smartphone rich in multimedia coupled with the industry’s leading mobile email and messaging capabilities,” said Angela Rittgers, director of product management for Alltel Wireless. “As Alltel expands its handset lineup and showcases hot phones for spring, we know that the BlackBerry Pearl Flip will be a favorite with customers across the 22 states that we continue to service.”

Featuring a large SureType QWERTY keyboard, an intuitive user interface with trackball navigation, built-in GPS with BlackBerry Maps preloaded and support for locations based applications and services, and a 2 MP camera able to record video*, the BlackBerry Pearl Flip 8230 smartphone is packed with powerful features, yet sleek enough to slip easily into a purse or pocket. It also features full HTML browsing, a rich media player with the ability to sync music from iTunes or Windows Media Player**, an expandable memory card slot (microSD/SDHC up to 16GB) and stereo Bluetooth support. Customers can activate the smartphone on BlackBerry Internet Service as well as BlackBerry Enterprise Server.

In addition to the BlackBerry Pearl Flip 8230 smartphone, Alltel customers can choose from a wide-range of additional phones that make perfect gifts for any occasion, including Mother’s Day, Father’s Day and upcoming graduations. Alltel is also offering the recently announced Motorola Evoke, great for social networking; the BlackBerry Curve™ 8330, one of the most popular smartphones available today; the BlackBerry Pearl™ 8130 smartphone, an impressive handset that combines multimedia and communications features in a compact design; the Motorola Hint QA30, a stylish, compact device with a slide-out keyboard; and the LG Rhythm™, allowing customers to bring their music with them, right on their handset.

Alltel Wireless continues to serve 2.2 million customers and operate in the 91 Cellular Market Areas (CMAs) that Verizon is required to divest. Alltel Wireless continues to be an industry-leader, providing choice and flexibility with its exclusive “My Circle” feature, providing unlimited calling to and from any 5, 15, or 25 numbers on any network. Alltel Wireless was also the first to offer Anytime Plan Changes, giving customers the flexibility to change their calling plans at any time without extending their contract.

For more information on the BlackBerry Pearl Flip 8230 smartphone, visit alltel.com or blackberry.com/blackberrypearl.

* Video recording requires a microSD card, which may be sold separately.
** Using BlackBerry Media Sync. Certain music files may not be supported, including files that contain digital rights management technologies.