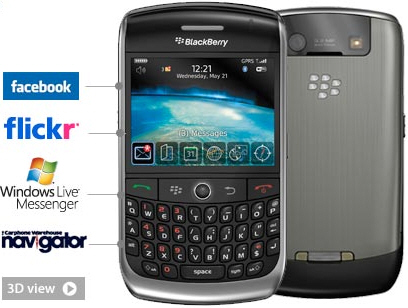 The Curve range of Blackberry smartphones has now expanded to include a new model which offers an even better screen resolution than the recently released Blackberry Storm, originally known as the Blackberry Javelin this new handset is the most sophisticated Blackberry Curve edition mobile phone to date.

Following on from the other 8-Series Blackberry phones such as the 8110, 8120, 8310 and 8820 the new 8900 offers a very similar exterior design with a slim build and wide spread but does not incorporate the trademarked Blackberry keyboard opting for a full qwerty instead, however the new 8900 packs a serious punch when it comes to technology and features.

The Blackberry Curve 8900 offers GPS satellite navigation technology alongside Blackberry Maps for route finding, places of interest and journey planning whilst on the move, with the simply addition of an in-car phone holder the Blackberry 8900 becomes a sophisticated Sat-Nav system to rival many of the best stand alone models.

Also present is WiFi technology for fast, wireless internet connections whilst out and about, users can connect to email, surf the net and connect with a range of compatible devices for data transfer, the only communication technology missing from the new Blackberry Curve 8900 is 3G, however WiFi should take care of most situations whilst EDGE technology over WLAN will also fill the hole.

The Blackberry 8900 offers the same specification camera as the touchscreen 9000 Storm at 3.2 megapixels and also incorporates a media player with a standard 3.5mm jack so that users can listen to their music through their own headphones rather than those supplied.

The BlackBerry 8900 Curve smartphone helps with a bigger more well-rounded mobile life, aimed primarily at business users the 8900 will also appeal to those who have prevously owned a Blackberry phone and are looking for an upgrade, it seems that once someone has gotten used to the unusual layout of the Blackberry keypads they find it very hard to return to the standard mobile phone keypad layout.

For those that are always on the go and who want to make life easier the Blackberry 8900 will help keep them connected to the people and information that matter. The impressive 2.4″ display screen opens up a captivating window and the full QWERTY keyboard makes communicating easy with one or two-thumb typing. Built for business capabilities like email conference calling and internet access the Blackberry 8900 has all a user needs to keep on top at work.

The Blackberry Curve 8900 helps keep the balance between work and play allowing users to stay in touch in real time with Windows Live Messenger. Equipped with Wi-Fi connectivity for high speed browsing and download ‘the curve’ allows users to search through Google or access social networking sites such as facebook anytime. When words are not enough users can take a picture via the 3.2-megapixel camera with autofocus, they can even listen to their favorite music tracks with the MP3 player. With built-in GPS capabilities and BlackBerry Maps the user gets text-based turn-by-turn directions to help them figure out where they are and how to get where they need to be.

The Blackberry 8900 has all the features a user could need and want at their fingertips with the flexibility and freedom to manage their busy lives and even have some fun along the way. Users can keep their finger on the pulse of what’s important to them, the stylish and classy BlackBerry 8900 Curve smartphone which is easy-to-use will suit many differing requirements from the most demanding mobile user.

For those that fill their phones memory full of their favourite music tracks the Blackberry Curve 8900 offers an expandable memory of up to 16GB with SDHC cards, all of this technology has been packed into a phone that measures just 13.5mm deep and 109mm high.

The new Blackberry Curve 8900 has been initially released on the O2 network in the UK, it is widely expected that this new smartphone will also be picked up by both Orange and T-Mobile in the near future aswell as being offered as a SIM Free mobile phone for those that do not want to commit to a contract deal or who may struggle with a network credit check.

With a 2.4inch colour screen and Wi-Fi the NEW BlackBerry Curve 8900 displays clear, crisp images and is ideal for reading emails and logging onto the web. With its head for business, serious social applications, and killer curves, the new BlackBerry Curve 8900 connects business life, family life and social life all in one small and stylish package.