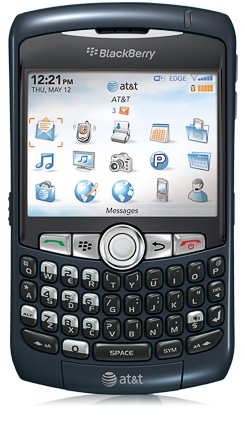 AT&T is turning up the heat with the ever-popular BlackBerry Curve™ smartphone. AT&T Inc. (NYSE: T) and Research In Motion (NYSE: RIMM) announced today the immediate availability of the BlackBerry Curve 8320 smartphone with built-in Wi-Fi, which gives AT&T customers with unlimited corporate or personal BlackBerry service plans free and seamless access to thousands of AT&T Wi-Fi Hot Spots in the U.S.

Available in sapphire blue, the BlackBerry Curve 8320 smartphone makes it easy to connect to home or campus Wi-Fi networks and to automatically connect to any of the more than 17,000 AT&T Hot Spots nationwide. These include Starbucks, Barnes & Noble and thousands more restaurants, airports, hotels and other convenient locations across the U.S. Those customers who subscribe to unlimited corporate or personal BlackBerry service plans can access these AT&T Hot Spots at no charge.

The BlackBerry Curve 8320 smartphone — with 802.11 b/g — provides broader data coverage, and customers also can carry on a telephone conversation on the cellular network while simultaneously accessing data via Wi-Fi.

“The BlackBerry Curve 8320 provides AT&T customers with yet another outstanding global solution that comes with a unique Wi-Fi feature that automatically connects to AT&T Hot Spots,” said Michael Woodward, vice president, Smart Devices, AT&T. “AT&T customers can also use their BlackBerry Curve smartphone to connect to a Wi-Fi hotspot both in the U.S. and abroad, and when they do so, they can carry on a phone conversation while they’re checking e-mail, browsing the Web or performing other data functions. This allows our customers to be even more productive and get greater value out of their BlackBerry smartphone, particularly when they can connect free of charge to an AT&T Hot Spot in the U.S.”

Mark Guibert, vice president of corporate marketing at RIM, said: “The BlackBerry Curve is one of the most successful smartphones in the world — customers love its communications and multimedia features, easy-to-use keyboard and compact design. With the BlackBerry Curve 8320, AT&T customers will enjoy easy access to Wi-Fi networks whether they’re in the U.S. or traveling abroad.”

The BlackBerry Curve 8320 smartphone packs numerous new features including an enhanced HTML browser that supports a Web browsing experience with desktop-style depiction. The smartphone’s trackball acts like a computer mouse, allowing users to quickly scroll through a page, zoom in and out or click on hotlinks. The BlackBerry Curve 8320 also has an improved user interface and support for HTML e-mail, and it allows users to download attachments as well as edit Microsoft Word, Excel and PowerPoint files directly on the handset using the preloaded DataViz Documents To Go software suite.

The BlackBerry Curve 8320 smartphone retains the features that have made it one of the most popular smartphones in the world. It combines the renowned BlackBerry e-mail and messaging capabilities with a full QWERTY keyboard, built-in spell checker, premium phone features and comprehensive organizer, and it sports a large, ultra-bright, 320-by-240 display that supports more than 65,000 colors and comes with light-sensing technology that automatically adjusts backlighting for optimal viewing. In addition, it features Bluetooth 2.0 support, a 2 megapixel camera with zoom, flash and video recording2, advanced media player with desktop media management software and expandable memory of up to 16GB via its microSD/SDHC memory card slot. The BlackBerry Curve 8320 smartphone also includes AT&T Music™ subscription services, integrated Push To Talk (PTT) and, when used with a separate Bluetooth-enabled GPS receiver, provides access to the popular AT&T Navigator and YELLOWPAGES.COM mobile services.

Small business customers also can couple their BlackBerry data plans with new AT&T BusinessTalk voice plans, which start at $60 a month for five users and 700 Anytime Minutes and can be expanded for $9.99 a line to accommodate up to 40 users and 20,000 Anytime Minutes. When combined with BlackBerry Professional Software, AT&T BusinessTalk provides small businesses with a complete voice and data solution. Companies may also choose BusinessTalk with either unlimited Mobile to Mobile or Push To Talk features.