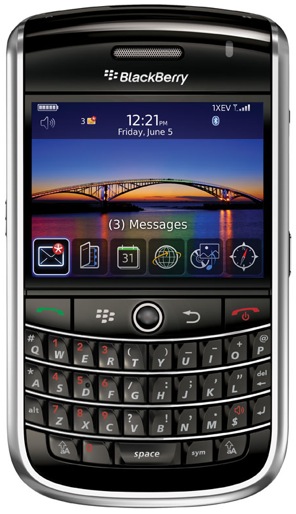 Research In Motion (RIM) introduced the BlackBerry Tour™ — a powerful new 3G BlackBerry smartphone for CDMA customers in North America. The new BlackBerry Tour smartphone offers state-of-the-art communications and multimedia capabilities with outstanding mobile performance and consummate styling. It is a feature-packed and highly refined world phone that keeps you connected and lets you tour the world in style.

“BlackBerry continues to be the top selling smartphone brand in North America and we are proud to add this powerful new 3G world phone to our successful product portfolio,” said Mike Lazaridis, President and Co-CEO at Research In Motion. “With its striking design and exceptional performance, the new BlackBerry Tour will offer a compelling choice for the growing number of wireless customers looking to upgrade their existing cell phone to a smartphone.”

The BlackBerry Tour smartphone allows customers to stay seamlessly connected – across town and around the world. It supports high-speed 3G EV-DO Rev. A networks in North America, as well as 3G UMTS/HSPA (2100Mhz) and quad-band EDGE/GPRS/GSM networks abroad.

The BlackBerry Tour smartphone also provides the industry’s leading mobile solution for email, messaging (IM, SMS, MMS) and social networking together with built-in GPS and advanced multimedia capabilities, enabling customers to make the most of both their personal and professional time.

Other key features of the BlackBerry Tour smartphone include:

The BlackBerry Tour smartphone (model number: 9630) is expected to be available this summer from carriers in North America.

* Video recording requires microSD card, which may be sold separately
** Certain music files may not be supported, including files that contain digital rights management technologies