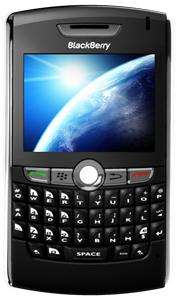 “The BlackBerry 8820 is an extraordinary business phone for people who really care about mobile communications and productivity. It features all the renowned power and usability of the BlackBerry platform with executive class styling and unprecedented connectivity features, including cellular, Wi-Fi and built-in GPS,” said Mike Lazaridis, President and Co-CEO at RIM. “The BlackBerry 8820 complements our carrier partners’ cellular networks with the added ability to stay connected via Wi-Fi at home, through hotspots and corporate campuses.”

Wi-Fi Connectivity
The BlackBerry 8820 smartphone supports the 802.11 a/b/g Wi-Fi standards to enable data access over Wi-Fi connections in the enterprise, as well as through public hotspots and wireless home networks. The smartphone works in conjunction with both BlackBerry Enterprise Server and BlackBerry Internet Service and can seamlessly switch between cellular networks and a Wi-Fi network to allow users to access email, Instant Messaging, organizer, web browsing and other mobile data applications.

To meet various security requirements, the BlackBerry 8820 is compliant with Wi-Fi security protocols including WEP (Wireless Equivalency Protocol), WPA (Wi-Fi Protected Access) and WPA2, as well as Cisco Compatible Extensions for simple, secure connectivity with Cisco wireless solutions. For enterprises that require Wi-Fi users to access the corporate network through a VPN (Virtual Private Network), the BlackBerry 8820 includes IPSec-based software that supports the most commonly deployed VPN gateways from vendors including Cisco, Check Point and others.

For more information about the BlackBerry 8820, please visit: www.blackberry8820.com.

About Research In Motion (RIM)
Research In Motion is a leading designer, manufacturer and marketer of innovative wireless solutions for the worldwide mobile communications market. Through the development of integrated hardware, software and services that support multiple wireless network standards, RIM provides platforms and solutions for seamless access to time-sensitive information including email, phone, SMS messaging, Internet and intranet-based applications. RIM technology also enables a broad array of third party developers and manufacturers to enhance their products and services with wireless connectivity to data. RIM’s portfolio of award-winning products, services and embedded technologies are used by thousands of organizations around the world and include the BlackBerry wireless platform, the RIM Wireless Handheld™ product line, software development tools, radio-modems and software/hardware licensing agreements. Founded in 1984 and based in Waterloo, Ontario, RIM operates offices in North America, Europe and Asia Pacific. RIM is listed on the Nasdaq Stock Market (NASDAQ: RIMM) and the Toronto Stock Exchange (TSX: RIM).