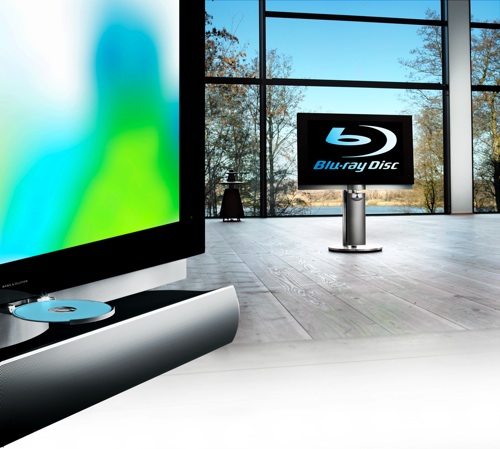 The BeoVision 7 40-inch LCD TV is now updated with an integrated Blu-ray player, 100 Hz picture technology, and a DVB-HD module, enhancing the extreme flexibility of this home entertainment system.

BeoVision 7-40 has become a flagship Bang & Olufsen product since its initial launch, but by implementing a Blu-ray player and a DVB-HD module, Bang & Olufsen takes this television to a whole new level of integration. In addition to support of the highest quality video formats, BeoVision 7-40 offers freedom of choice between a plethora of placement options and different loudspeakers, and the optional Blu-ray player and DVB-HD module further add to complete customization. Finally, the endless connection options enable the expansion of the system with a multitude of home integration possibilities making BeoVision 7-40 the center of one’s home.

Integrated Blu-ray player
The standard DVD optical drive of BeoVision 7-40 has been replaced with an optional built-in Blu-ray drive. Bang & Olufsen is one of very few suppliers to offer a television system with a Blu-ray player built-in. The Blu-ray player also includes the BD Live feature which presents a range of extra interactive possibilities via the Internet, such as additional material and film trailers.

Optimized picture performance
BeoVision 7-40 integrates the sophisticated Bang & Olufsen video engine which offers some of the best video signal processing on the market. In addition, Bang & Olufsen has now included double frame rate technology, also known as 100Hz, with motion compensation. As a result, the picture refresh rate of BeoVision 7-40 has been doubled compared to conventional LCD televisions and the inherent blur of LCD technology has thus been reduced significantly.

Choice of loudspeaker
Although it is a flat screen television, BeoVision 7-40 offers anything but flat sound. Independent of the user’s preferences, BeoVision 7-40 provides the best sound experience in any situation. With two dedicated loudspeakers to choose from, BeoVision 7-40 can be tailored to the individual sound setup in the home.

BeoLab 7-2 is the stereo loudspeaker unit, which is designed as a genuine hi-fi loudspeaker concept and optimized for television sound. BeoLab 7-4 is the center loudspeaker unit, complete with the proprietary Acoustic Lens Technology, and is ideal for the ultimate surround sound experience.

Optional DVB HD module
The digital video broadcast module has been upgraded to DVB-HD for high definition program reception. This optional module is mounted on the video engine of BeoVision 7-40, which means that full HD signals are razor-sharp on BeoVision 7-40. The module supports reception of terrestrial signals as well as signals from selected cable program providers.

Freedom in placement
The BeoVision 7-40 is one of the very few flat screen televisions systems designed specifically with floor placement in mind. The flexibility of the turn-and-tilt mechanism is possible via the Beo5 remote control to one’s favorite viewing position. Bang & Olufsen also offers a number of alternative placement options such as wall or table mount solutions. The available color palette further adds to this freedom by offering a choice between natural aluminum, black, dark grey, red, blue, and gold.

Centre of intelligent home
BeoVision 7-40 is the cornerstone in the intelligent home as it is the hub for combining audio and video experiences with other home automation systems. For many customers, home automation is becoming more and more interesting, and due to increasingly sophisticated interfaces, Bang & Olufsen customers can actually control and operate all their A/V and home automation equipment from the programmable Beo5 remote control all over the house. Control of light settings as well as access to security systems, ventilation, curtains, pool cover, and alarm systems are only some of the countless possibilities.

What you need to know when shopping for vintage audiophile gear.