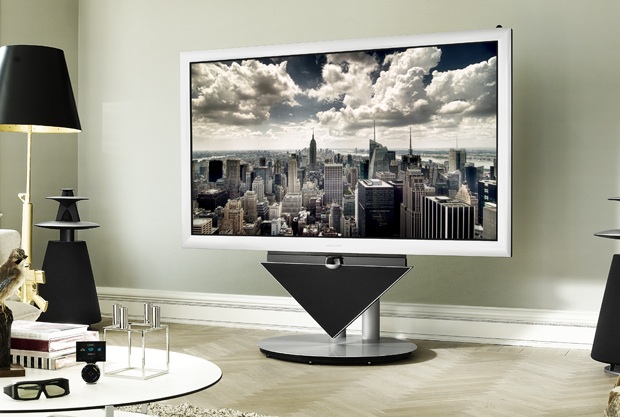 Bang & Olufsen announced its first 3D HDTV, the top-of-the-line BeoVision 4-85-inch plasma TV. It incorporates state-of-the-art performance within audio, video, magical moving mechanics and intelligent home integration, all completely controlled by the Beo6 remote control. It revolutionizes the home theater experience with its patented Automatic Color Management technology, which ensures vibrant color consistency, and an Automatic Picture Control feature that adjusts the screen according to the ambient lighting in the room.

It rivals any other large screen 3D TV on the market as it features a uniquely engineered floor stand which elevates the 85 inch screen via the Beo6 Bang & Olufsen remote control. In standby mode, the television even reverts back down the stand to settle just inches above the floor, reducing the dominance in the room. Customers can even tilt and turn the TV until they choose the perfect viewing angle with the same remote control.

The size of the carefully crafted 85″ screen with its high-grade aluminium frame is impressive, but it becomes even more impressive when the screen starts to move. The movements of the screen and speaker are accelerated and decelerated in the process to underline the muscular progress, and the initial lift of the screen is timed with the start up time of the BeoSystem 3 picture and surround sound engine. The hallmark electronic curtains are then pulled aside while the BeoLab 10 centre loudspeaker is moving forward into position.

Not only does the BeoVision 4-85 plasma panel qualify as ‘Full HD’, which means razor sharp details, rich, lifelike colours and smooth movement of objects on the screen; it is also Bang & Olufsen’s first TV concept that includes 3D technology using active shutter glasses. In addition, with the help of Automatic Colour Management to counter the effects of age, it delivers exceptional picture quality, ensuring the same high level of performance year after year.

“BeoLab 10 is capable of handling the centre channel perfectly even when combined with our most powerful loudspeaker, BeoLab 5. With the patented Acoustic Lens Technology, sound from the centre channel is spread equally in the horizontal plane, allowing you to get all the nuances from e.g. film dialogue, regardless of where you sit in the room,” says Jens Rahbek, Acoustic Engineer at Bang & Olufsen.

Elegant giant
The new 85-inch member of the BeoVision 4 family is offered with a unique stand that elevates the screen at the touch of a button. When the TV is turned on, the screen will elegantly elevate itself to the optimal viewing position, and the seamlessly integrated BeoLab 10 centre loudspeaker will emerge underneath the screen. At the same time, the screen will turn and tilt according to the user’s preferences. When switched off again, the impressive screen moves down towards the floor in a powerful, sturdy fashion and is parked only inches above the floor, making it look less prominent in the room when not in use.

“Placed on a motorized stand, BeoVision 4 represents a whole new and unique approach to the placement of a giant flat screen TV,” says Product Manager Ole Moltsen. “Bang & Olufsen is among the few companies that are able to deliver a TV screen that size, and we are the only ones who can offer a stand that will actually lift the screen off the floor, and then turn and tilt it to your preferred viewing position.”

BeoVision 4-85 is also available as a screen-only solution, where the screen is mounted on a wall bracket as known from other BeoVision 4 family members.

What you need to know when shopping for vintage audiophile gear.