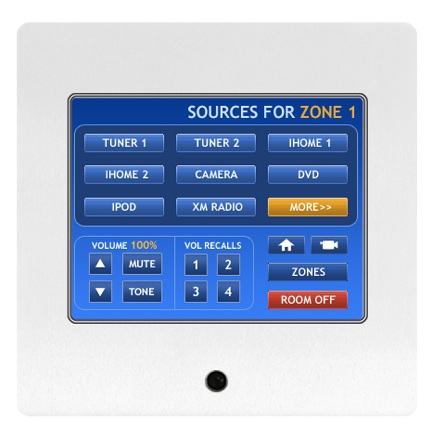 Audio Design Associates (ADA), the recognized brand of excellence in high-end custom installed electronics and a founding member of the CEDIA organization, is demonstrating its new TS-5000 and TS-8511 touch screens at the Integrated Systems Europe (ISE) 2008 in Amsterdam from January 29-31. ADA’s exhibit is Home Cinema Europe Booth K87.

“The TS-5000, which began shipping in the 3rd quarter of 2007, is turning out to be one of the most important products this 30-year old company has ever introduced,” says VP and COO Richard Stoerger. The TS-5000 is a 4-inch (10 cm) color TFT display that fits a standard US double-gang wall box. It runs on one Category-5 cable that provides power; control; active two-way feedback from devices like iPods, music servers (Escient, Request, Kaleidescape), and ADA radio tuners; and even live-motion video at 16 frames per second.

The TS-5000 also features a built-in IR receiver for IR repeating, a front panel mini-USB port for upgrades without de-installation, and a screw-less magnetic all-metal faceplate. Fully self-contained, the TS-5000 holds control codes, graphics and pages thus requiring no external controller making it interchangeable with any ADA keypad. Most important, the TS-5000 requires no custom programming.

“Since CEDIA Expo this past fall, I spent time talking to dealers who installed the TS-5000, to get their feedback on the touch screen. To my delight, everyone, including some of our most critical dealers, love the device! Several called it the perfect control, noting that it is easy for their customers to learn how to use; great for navigating iPods and other devices which provide feedback, and easy to see from a distance and even wide angles,” says Stoerger.

“What amazed these dealers the most was the effortless way in which the TS-5000 is setup,” added Stoerger. Using ADA’s standard Keypad Uploader PC Program — which is used to program all ADA keypads with the room names, the source names, and what the sources are — the TS-5000’s automatically and dynamically assemble the touch screen pages by themselves.”

Albert G. Langella, ADA’s President, CEO and Chief Design Engineer notes, “The TS-5000 has been in the works for over a year with a great deal of time spent to make certain that our dealers wouldn’t lose money because of complex programming involved when implementing other touch screens. But the real secret to its incredible success is that it is also cool and easy to sell.”

The TS-5000 works any of ADA’s multi-room systems including the Suite 8200, Suite 8×8, Suite 16 as well as SWAN, ADA’s bold new multi-room system for structured wiring enclosures and the winner of CEDIA’s Product of the Year Award. When employing the VSWH-8 wiring harness, the TS-5000 can display live motion video without adding another wire, making this small, yet elegant touchscreen the only control on the market that can depict someone at the front door.

Another accessory is the ADA MSC-3LU and MSC-3LT that permits the TS-5000’s to control Lutron or Litetouch lighting systems. “While I won’t claim that we are trying to take on AMX or Crestron (both integrate great with ADA systems) we are expanding into touch screen control where appropriate. The dealers interested in our touch screens want to offer this technology at a fair price and at the same time want to avoid getting dragged into the abyss,” says Stoerger.

“With so many other control systems, I hear the nightmares dealers go through trying to collect the final payment from their customer. They often have their top and most costly programmers on site massaging touch screen pages at the customer’s whim. The TS-5000 permits them to avoid that entire mess and still integrate A/V and lighting on an attractive and small touch screen. At $1299 US, the TS-5000 is incredibly affordable, especially considering all that it does,” added Stoerger.

TS-8511 Touch Screen
Based on the incredible success of the TS-5000, ADA just returned from the 2008 International Consumer Electronics Show in Las Vegas where it debuted the TS-5000’s new baby brother, the TS-8511 Touch Screen. The TS-8511 is the only touch screen on the market that fits a standard single-gang wall box and features an LCD display also running on one Cat-5. And like the TS-5000, the TS-8511 will require no programming. Set to retail for $499 US, the TS-8511 should begin shipping in the second quarter of 2008.

About Audio Design Associates
Headquartered in White Plains, New York, Audio Design Associates (ADA) is recognized as the brand of excellence and has been the undisputed leader in the fields of high-end home theater and multi-room audio technology since 1977. Albert Langella, ADA’s Chief Design Engineer, CEO and President, received CEDIA’s most hallowed award, The Lifetime Achievement Award, in 1994, in honor of his achievements with the company and technological contributions to the marketplace. In 2006, COO and VP Richard Stoerger received recognition as CEDIA Manufacturer Volunteer of the Year.

June 2007 marked 30-years in business for ADA. In celebration of the company’s achievements and its heritage of proudly manufacturing in the United States of America, on July 4th ADA implemented ADA-30, a 30-year reasonable warranty on the company’s entire product line (comprised of home theater and distributed audio components). ADA-30 applies to all new ADA products sold by authorized dealers beginning July 4th, 2007 and running through July 4th, 2008.