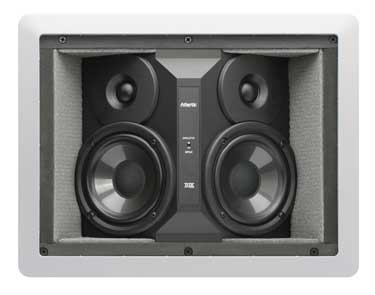 NORWOOD, MA (5/5/08) — Atlantic Technology has introduced a two dipole/bipole switchable surround speakers in its IWTS line (In Wall Theater System) of architectural speakers for home theater. Both the IWTS-30 SR and the IWTS-14 SR feature dual two-way driver arrays facing front and rear to fill the listening area with ambient sound for a remarkably convincing, lifelike theater soundfield. The IWTS-30 SR has earned THX Ultra certification, a testimony to its remarkable performance and high output capabilities. The IWTS 14 SR (which is not THX Certified) shares the capabilities and feature set of its sibling, but with slightly less extended bass output.

To meet THX specifications, the left and right surround models in a home theater system must operate in a dipole mode, where each of the two driver banks operates out-of-phase with one another to create a highly diffuse, non-localizable sound. This is critical to developing the ambient soundfield that immerses listeners in the movie rather than just in front of it. For the back surround channels, however, THX recommends direct radiating, or in-phase bipole operation, which enhances special effects rendering, and is also preferable for multichannel music reproduction. The IWTS-30 SR and IWTS-14 SR each feature a front-panel toggle that allows installers and consumers to select either dipole or bipole operation, to meet their listening material, theater setup, and preferences.