Atlantic Technology introduced the world’s first seven-channel sound bar home theater speaker system at the CEDIA Expo held in Atlanta, September 9-13. The Atlantic Technology FS-7.0 Surround Bar is the first loudspeaker capable of reproducing all seven channels of a home theater soundtrack in a single 40-inch wide wall-mountable enclosure. The company has also introduced the SB-800, a powerful 8-inch subwoofer that is designed for optimal integration with the FS-7.0.

“Single-enclosure surround sound systems have become an important part of the home theater marketplace,” comments Steve Feinstein, Atlantic Technology Director of Marketing and Product Development. “But we’ve never been happy with the digital processing approach that has dominated the category. So we pored over the psycho-acoustic research, went back to the speaker design drawing board, and fleshed out an all-speaker solution that retains every iota of the original sound information, but re-distributes it among a sophisticated driver array to deliver cleaner, fuller, and more convincing surround sound than we’ve heard from any other system” 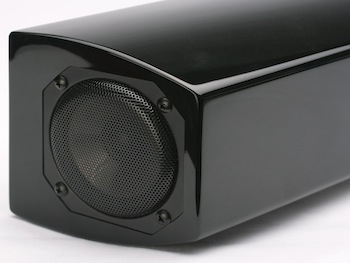 The FS-7.0 is capable of reproducing a full seven channels of home theater audio thanks to a creative assemblage of technologies and drivers. The speaker’s front baffle includes three 1-inch soft dome tweeters, each of which handles the upper frequencies for one of the front LCR channels. Also on the front panel are a pair of 4×6-inch woofers, each featuring dual voice coils that allow these two woofers to reproduce all three of the front soundstage channels’ upper bass and midrange reproduction. The left driver reproduces the left front channel and half of the center channel, while the right driver handles the right front channel and the other half of the center channel. This arrangement saves cabinet space and maintains a trim enclosure. The LCR treble is handled by the three 1-inch tweeters.

For the surround channels, the company has designed a unique pair of full-range 3-1/4-inch drivers mounted at either side of the cabinet. Each driver has been situated at a very precisely determined radiation angle to maximize the immersion of the surround field by taking advantage of reflections from the front and side walls of the theater. Additionally, each of these patent-pending drivers features a triple voice coil design, allowing them to reproduce both the side and rear surround channels, as well as incorporating a portion of the front left and right channels to impart a greater sense of spaciousness to the front soundstage. The end result is an impressively immersive surround field that is compatible with any multichannel receiver or processor in existence. 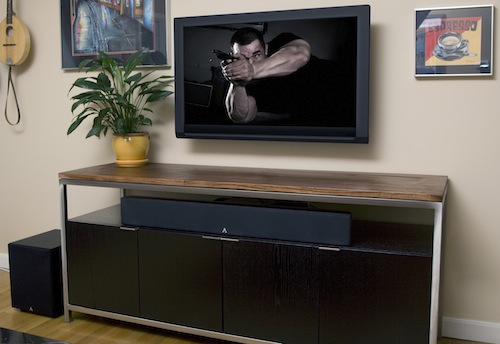 The final component in Atlantic’s compact multichannel surround system is the addition of a powered subwoofer to reproduce the special effects and deep bass signals that drive much of the home theater experience. While the FS-7.0 system is compatible with any subwoofer, Atlantic has designed a model specifically for this system. The SB-800 is a compact, but powerful, 100-watt subwoofer with a long-throw 8-inch woofer that is capable of linear output down to 32 Hz, and output of up to 103 dB in a 2000 cubic foot room.