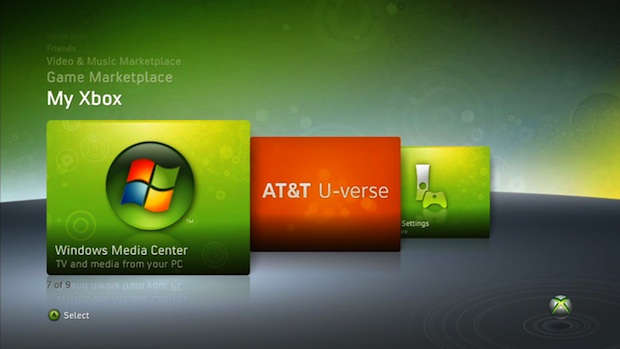 AT&T and Microsoft announced the Oct. 15 launch of U-verse TV on Xbox 360 for U-verse customers, which lets you enjoy the U-verse TV experience on your existing Xbox 360 device, replacing the need for an extra receiver in your home. AT&T is the first TV provider in the U.S. to offer live TV service through an Xbox 360.

AT&T also announced the upcoming launch of U-verse Mobile for Windows Phone 7 devices. Beginning in November, the popular U-verse Mobile app will be preloaded so that any AT&T wireless customer with a Windows Phone 7 device — whether or not they are a U-verse TV customer — can download and watch hit TV shows while they're on the go. This is the first time an AT&T U-verse service will be available nationwide.

Using your Xbox 360 as a U-verse receiver, you can receive chat and game invitations from friends through Xbox Live while watching live TV and switch seamlessly from game to TV mode without switching video inputs on your TV screen. You will enjoy virtually the same U-verse TV experience and features available today, including the ability to watch live TV, manage and play back DVR recordings and access interactive apps, your program guide, the On Demand library and more. U-verse TV on Xbox 360 also allows customers to avoid an extra box on their entertainment center and the need to pay a monthly rental fee for an additional receiver.

New customers can order the $99 Xbox kit at 1-800-ATT-2020 when they subscribe to U-verse, and a U-verse technician will load U-verse software on their Xbox 360 during their service installation.

Window Phone 7 U-verse App
In November, any AT&T Windows Phone 7 owner will be able to access U-verse Mobile, a popular app that lets you download and watch hit TV shows on your smartphone. You can browse or search a library of downloadable shows, and select which series or specific episode you want to download over Wi-Fi.