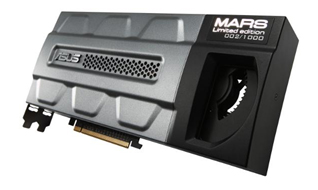 ASUS announced the limited edition Republic of Gamers (ROG) MARS/2DI/4GD3 custom-built graphics cards as first showcased at Computex 2009 will soon be sold in North America on a first come, first served basis. The exact time and place of availability will be announced on ASUS’ Official Twitter social networking page.

Each graphics card will be assigned a unique serial number. With only 1000 units slated for production, the ASUS ROG MARS is a masterpiece of power and performance for the hardcore gamer and overclocker.

About ASUS
ASUS is a leading company in the new digital era. With a global staff of more than ten thousand and a world-class R&D design team, the company’s revenue for 2008 was 8.1 billion U.S. dollars. ASUS ranks among BusinessWeek’s InfoTech 100, and has been on the listing for 12 consecutive years.