ASUS announced a tablet combo concept that internally holds and operates a smartphone. The smartphone docks inside the tablet to give users an expanded view to suit their tasks. With the phone docked, it can recharge from the tablet's larger battery and the tablet can also make use of the smartphone's 3G internet connection. The dual interfaces for both the pad and phone ensure an enhanced user experience as the layout is automatically adjusted for all activities such as video conferencing, web browsing, and emailing. The Padfone solves the problem of data transfer hassles and multiple SIM cards when both a smartphone and 3G tablet are used. 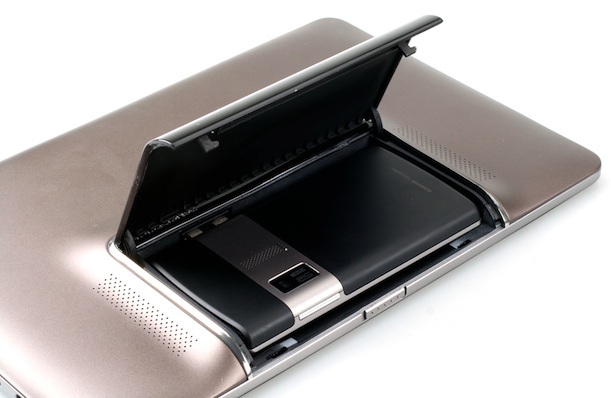 The idea is that the new ASUS smartphone is your everyday phone that you use as you would any other Android smartphone: make calls, send texts, read the news, watch YouTube, answer emails, update Facebook and Twitter, play Angry Birds — the usual routine. Then, instead of buying a whole new tablet for when you just want a bigger display for movies or to multi-task, the smartphone simply plugs into the back of the pad and you can carry on exactly from where you were before. It doesn't have to turn off — it does it all on the fly.

What if someone makes a call while it's docked in? Well either pop the phone out the back or use a Bluetooth headset.

Key features to this design provide easy syncing and file sharing between smartphone and tablet devices. Ideally, you'd be able to watch a video stored that was downloaded to your phone on the tablet. A feat that is next to impossible to do with today's tablet/smartphone offerings. However, future cloud-based storage options may eventually mitigate this problem.

Another benefit is the capability of having one data (3G/4G) contract that can be used by both devices. That could add up to huge savings in monthly fees, as it essentially cuts the costs in half.

Availability
No word on a release date, but ASUS said this is not just a concept product, however hardware specs are not currently finalized.