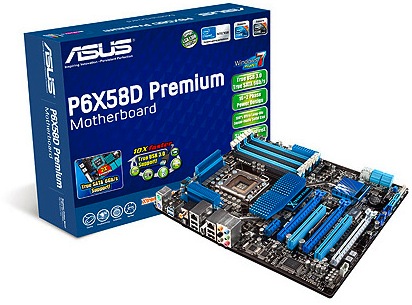 The P6X58D Premium features ASUS Xtreme Design, aimed at enthusiasts, gamers and benchmarkers. Testing has established its great performance and stability, explaining the achievement of the new record. The X58 chipset-based P6X58D Premium boosted the triple channel DDR3 to 2333MHz together with an Intel Core i7-980X processor and Kingston HyperX triple-channel DDR3 memory.

Rigorous Testing Leads to the Win
Not known for holding back, ASUS routinely puts all its motherboards through strenuous testing to discover their utmost potential and ensure complete stability and compatibility. This relates to both Intel and AMD platforms, giving most PC users in the world great peace of mind when choosing ASUS. In another milestone, the Intel P55-based ASUS P7P55D-E Series of motherboards recently hosted record-breaking dual-channel DDR3 memory clocked at 2.5GHz, the fastest ever of its type.

The ASUS dedication to uncompromising performance testing is sure to bring great benefit to the industry and consumers in years to come.